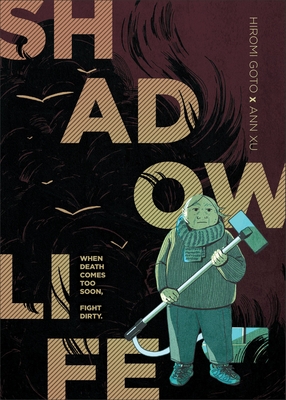 When Kumiko’s well-meaning adult daughters place her in an assisted living home, the seventy-six-year-old widow gives it a try, but it’s not where she wants to be. She goes on the lam and finds a cozy bachelor apartment, keeping the location secret even while communicating online with her eldest daughter. Kumiko revels in the small, daily pleasures: decorating as she pleases, eating what she wants, and swimming in the community pool. But something has followed her from her former residence—Death’s shadow.

Kumiko’s sweet life is shattered when Death’s shadow swoops in to collect her. With her quick mind and sense of humor, Kumiko, with the help of friends new and old, is prepared for the fight of her life. But how long can an old woman thwart fate?

Hiromi Goto is an emigrant from Japan who gratefully lives on the Unceded Musqueam, Skwxwú7mesh, and Tsleil Waututh Territories. She's written Chorus of Mushrooms, The Kappa Child, along with three novels for children and youth, a book of poetry, and a collection of short stories. Shadow Life is her first graphic novel.

Ann Xu is an Ignatz-nominated cartoonist and illustrator working in Baltimore. She graduated with a BFA in Illustration from the Maryland Institute College of Art in 2017. Her graphic novel work includes Shadow Life and Measuring Up.

"The loose black-and-white line art by Xu, including interspersed wordless panels, perfectly captures the progression of Kumiko’s emotions from serenity to revelation to distress to determined defiance, as well as the narrative’s fantastical and surreal turns. Quiet sensitivity and humor shine throughout, lighting the bright triumph in one woman’s twilight."—Publishers Weekly, starred review