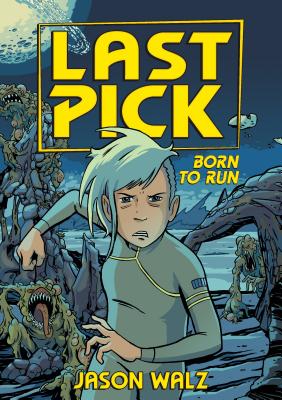 This is book number 2 in the Last Pick series.

In Last Pick: Born to Run, the second volume of his graphic novel series, Jason Walz pairs vivid world-building and fast-paced adventure in a beautiful story of bravery, sacrifice, and sibling devotion.

Four years ago, aliens kidnapped most of mankind, leaving behind those they deemed unworthy—the “last picked.”

The future for Sam is bleak and unthinkable. A galaxy away from her twin brother, she is a pawn in the aliens’ bloody civil war. But with her new friend Mia, Sam has found a way to resist her captors and hold onto her humanity.

Back on Earth, Sam’s twin, Wyatt, is leading a resistance of his own. With a ragtag army of the old, the young, and the disabled, he has a plan to bring the fight to his alien captors. But to defeat the aliens, Wyatt may need to befriend one.

“A fun and inspiring story (with great art) about how the most overlooked people in society are often its biggest heroes. A must-read for any kid feeling left out.” —James Breakwell, author of Only Dead on the Inside and Bare Minimum Parenting

“With daring escapes and heroic actions, this installment ratchets up the action with constant threats and higher stakes, but Walz still takes time to deepen his characters . . . A great pick for kids who have outgrown Ben Hatke's Mighty Jack series.” —Booklist

"Will appeal to kids who’ve come to love cartoons that have many of the same messages, from Steven Universe to Gravity Falls." —Paste Magazine