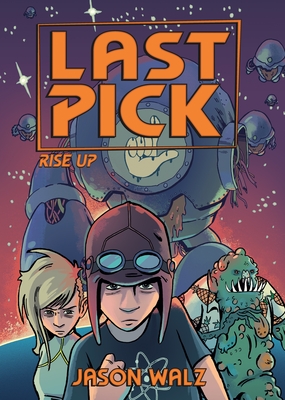 This is book number 3 in the Last Pick series.

Wyatt is now the reluctant leader of the "last picked"—the disabled, the elderly, and those deemed too young to be useful for hard labor by their alien captors. But how can he and his ragtag allies take down an entire alien federation?

Meanwhile, Wyatt's twin sister Sam and her girlfriend Mia are creating chaos all over the galaxy in an attempt to rescue Sam's parents. But even if the family is reunited, can they stay alive long enough to see the end of the alien regime?

Praise for Last Pick: Rise Up:

"This is an adventure-filled sci-fi novel that sensitively highlights the humanity and heroism of those whom society sees as marginalized or unimportant. The characters in this dystopian landscape simply exist in their identities, free of stereotypes, while acknowledging the challenges they face... A must for fans of the earlier installments."—School Library Journal

Praise for the Last Pick series:

"Walz’s series has been consistently fantastic, with its inclusive worldbuilding and electrifying pacing coupled with dazzling, cinematically styled art... An affecting and unforgettable SF series with heart."—Kirkus