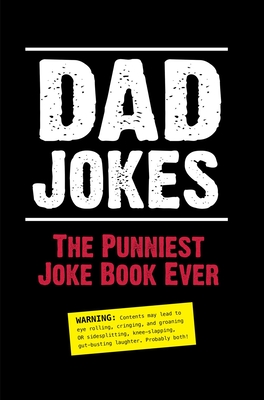 By Editors of Portable Press


Special Order—Subject to Availability
Dad's comedy arsenal is about to get a huge upgrade...to the relief of everyone around him!

Put an end to courtesy laughs and awkward silences with the jokes in this book! From the people who brought you Uncle John's Bathroom Reader, this is an eclectic collection of the punniest, funniest, most outrageous knee-slappers that have ever been told! At work, at home, at the game—Dad will beat them all to the punch...line, that is! He'll be hip and humorous with totally bodacious jokes like these:

Einstein developed a theory about space. And it was about time, too!

Why is Christmas just like another day in the office?
Because you do all the work and some fat guy in a suit gets all the credit!

And many more!
Portable Press is a tight-knit group of writers, researchers, and editors who are responsible for some of the publishing industry’s most popular non-fiction trivia and facts books. Aside from creating the fan-favorite Uncle John’s Bathroom Reader series (more than 16 million books in print since 1988), the Portable Press team also specializes in regional and kids’ titles, plus gift books, activity books, and whatever else strikes their fancy.