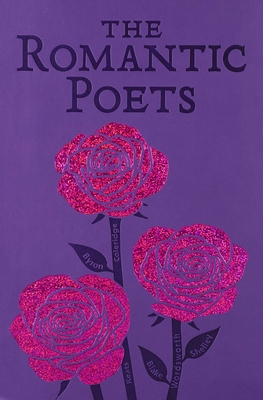 
Not On Our Shelves—Ships in 1-5 Days
Feelings come alive through the words of the Romantic poets.

Romanticism gained traction in the late 1700s as writers moved away from the intellectualism of the Enlightenment and toward more emotional and natural themes. The major works of the movement’s six most famous poets—William Wordsworth, George Gordon Byron, Percy Bysshe Shelley, Samuel Taylor Coleridge, John Keats, and William Blake—are represented in this handsome Word Cloud Classics volume, The Romantic Poets. One of the largest and most influential artistic movements in history, Romanticism valued intuition and pastoralism, and its themes are well represented in the verse of its stars.
John Keats (1795–1821) was an English Romantic poet. He was one of the main figures of the second generation of Romantic poets along with Lord Byron and Percy Bysshe Shelley, despite his work having been in publication for only four years before his death.

George Gordon Byron (1788–1824), commonly known as Lord Byron, was an English poet and a leading figure in the Romantic movement.

Percy Bysshe Shelley (1792–1822) was one of the major English Romantic poets and is regarded by critics as one of the finest lyric poets in the English language.

William Wordsworth was a major English Romantic poet who, with Samuel Taylor Coleridge, helped to launch the Romantic Age in English literature with the 1798 joint publication Lyrical Ballads.

Samuel Taylor Coleridge was an English poet, literary critic and philosopher who, with his friend William Wordsworth, was a founder of the Romantic Movement in England and a member of the Lake Poets.

William Blake (1757–1827) was an English poet and artist and one of the most important members of the Romantic movement.