Yours 'Til Niagara Falls (Hardcover) 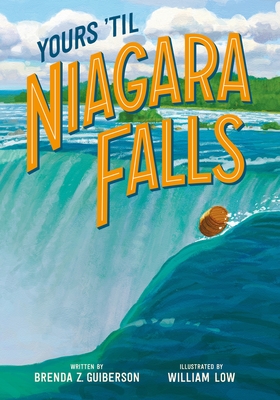 Yours 'Til Niagara Falls (Hardcover)

A thrilling, fact-filled history of Niagara Falls, following its evolution from the age of dinosaurs to its future disintegration.

Millions of years ago, Niagara Falls was not a waterfall. Back then, ocean covered the land.

Eighteen thousand years ago, all that water was locked up in ice.

Then 12,500 years ago, the ice melted! It gushed into lakes that flowed into a river that plunged over a steep cliff. Crash! Roar! Sploosh!

That was the noisy beginning of one of the world’s most majestic waterfalls. Experience the incredible history of this misty, mystical cascade of water in Yours 'Til Niagara Falls, told from the perspective of Niagara Falls itself.

Brenda Z. Guiberson has written many books for children, including Cactus Hotel, Spoonbill Swamp, Moon Bear and Disasters. As a child, Brenda never thought she wanted to be a writer—her dreams tended more toward jungle explorer. She graduated from the University of Washington with degrees in English and Fine Art. She started thinking about writing for children when her son went to elementary school, and she volunteered in his class and in the school library. After taking exciting trips that involved a fifty-foot cactus, hungry alligators and sunset-colored spoonbills, she wanted to create books for children that would be like a field trip. Her books are full of well-researched detail, and Brenda sees this research as an adventure—one that allows her to be a jungle explorer at last. She lives in Seattle, Washington.

William Low is the author and illustrator of Daytime Nighttime, Machines Go to Work, and the New York Times Best Illustrated Book Old Penn Station, as well as a four-time Silver Medal winner at the Society of Illustrators. He teaches at the Fashion Institute of Technology in New York City.