My Life as a Ninja (The My Life series #6) (Hardcover) 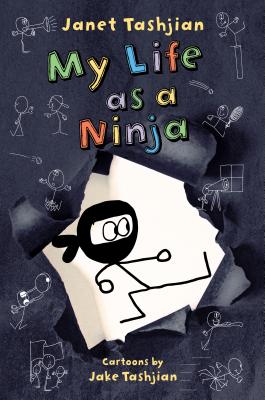 My Life as a Ninja (The My Life series #6) (Hardcover)

This is book number 6 in the The My Life series series.

Book 6 in the bestselling My Life series!

Derek Fallon has expanded his taste in cartoons to the world of manga and anime. Together with his friends Carly, Matt, and Umberto, Derek has fun learning about all the cool aspects of ninja culture. When someone starts vandalizing their school with graffiti of a mischievous troll-like figure, these ninjas-in-training are convinced they'll be able to crack the case. But it turns out that being a ninja is a lot more work than they thought, and this adventure brings about new opportunities for Derek to embarrass himself. For once, can he be the hero that saves the day?

My Life as a Book:
A 2011 Bank Street Best Children's Book of the Year

"Give this to kids who think they don't like reading. It might change their minds." —Booklist, starred review

"A kinder, gentler Wimpy Kid with all the fun and more plot." —Kirkus Reviews, starred review

"Sure to engage fans of Jeff Kinney's Diary of a Wimpy Kid books as well as those looking for a spunky, contemporary boy with a mystery to solve." —School Library Journal

My Life as a Stuntboy:
"Another fun, emotionally resonant read for the Wimpy Kid set and beyond." —Kirkus Reviews

"A fast-moving plot and relatable protagonist make this stand-alone sequel a good choice for boys who, like Derek, would rather reach for a TV remote or game controller than a book." —School Library Journal

"Fans of the first will be utterly delighted by this sequel and anxious to see what Jake will turn up as next." —The Bulletin

"This is a great package for kids, especially those like Derek who don't think they like to read." —Booklist