The Art of the Samurai: Yamamoto Tsunetomo's Hagakure (Hardcover) 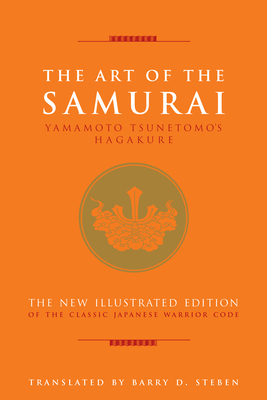 The Art of the Samurai: Yamamoto Tsunetomo's Hagakure (Hardcover)


Not On Our Shelves—Ships in 1-5 Days
The way of the samurai is found in death. These words, written 300 years ago by the samurai Yamamoto Tsunetomo, offer a seemingly grim introduction to a practice and philosophy that was in fact anything but morbid. Offering a fascinating glimpse into the secretive inner world of the samurai, the Hagakure remained closely guarded and was shown only to a chosen few for more than a century. This was a culture in which death was embraced, not as a morbid fascination, but as a method for eliminating fear. Yamamoto tells his readers how to foster courage, how to serve selflessly, how to become a skilled master of your own destiny, and how to infuse life with beauty while acknowledging its transience. Yamamoto's penetrating insights and profound aphorisms reflect important moral principles that still apply to us today. This masterpiece, preserved for generations in northern Kyushu by warrior chiefs as moral and practical instruction for themselves and their samurai retainers, is now presented in this beautifully illustrated edition that will enlighten anyone with an interest in Japanese culture and world literature.
Yamamoto Tsunetomo (June 11, 1659 - November 30, 1719), was a samurai of the Saga Domain in Hizen Province under his lord Nabeshima Mitsushige. For thirty years Yamamoto devoted his life to the service of his lord and clan. When Nabeshima died in 1700, Yamamoto renounced the world and retired to a hermitage in the mountains. Later in life (between 1709 and 1716), he narrated many of his thoughts to a fellow samurai, Tashiro Tsuramoto. Many of these aphorisms concerned his lord's father and grandfather Naoshige and the failing ways of the samurai caste. These commentaries were compiled and published in 1716 under the title of Hagakure, a word that can be translated as either In the Shadow of Leaves or Hidden Leaves. Dr. Barry Steben is a scholar of Chinese and Japanese languages and thought with a Ph.D. from the University of Toronto. He has taught at the University of Western Ontario, National University of Singapore, Chinese University of Hong Kong, and Shanghai University of Foreign Studies, where his teaching focused on translation and art history. His publications are listed on Academia.edu and some can be read there.