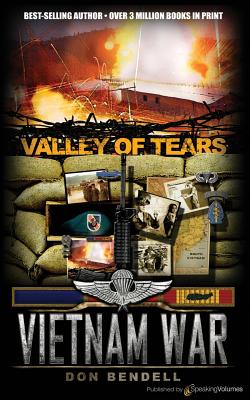 This is book number 3 in the Vietnam War series.

THE SHATTERING TRUE STORY OF THE SPECIAL FORCES COMBAT MISSION INSIDE THE SUPERHIGHWAY OF THE HO CHI MINH TRAIL. THE PLEI TRAP VALLEY: NVA STRONGHOLD. POW BASE CAMP. NEXUS OF THE HO CHI MINH TRAIL. Guarded by Soviet-made tanks, riddled with deep fortifications, commanded by regiments of well-equipped elite enemy troops, the Plei Trap Valley was called the superhighway of the Ho Chi Minh Trail. So confident of its invulnerability to U.S. assault were the North Vietnamese that they housed a major POW camp beneath its jungle canopy. Acclaimed Special Forces chronicler Don Bendell tells his all-combat true story of the battle for Plei Trap in a blizzard of spent shell casings, with rockets screaming overhead and fog banks of enemy gas rolling in. Virtually unchecked even by B-52 carpet bombing, a swollen torrent of supplies and fresh troops poured out of the valley into the Communist war effort... until a strike force spearheaded by a Special Forces airborne assault team and their one hundred Montagnard strikers dropped deep behind NVA lines. Their mission: to keep retreating NVA from escaping into Cambodia and free American POWs from behind the barbed wire of the NVA camp... at any cost. They paid heavily for the right to call Plei Trap the... VALLEY OF TEARS.
A best-selling western author, former US Army Special Forces (Green Beret) officer and disabled Vietnam veteran, Don Bendell is also very well-known in the SpecOps community and popular for his military thrillers, too. A widely-read and controversial editorialist, he has appeared on Fox News and many national radio shows, newspapers, and blogs. Don is noted for his wild sense of humor and blunt honesty, and has often been called a "John Wayne-type" by detractors. Don is a Grandmaster Instructor in 4 different martial arts and black sash instructor in Muay Thai kickboxing. He and his Master Instructor wife Shirley, the only couple to both be inducted into the International Karate and Kickboxing Hall of Fame, own a successful martial arts school in southern Colorado. Best-Selling Author, Over 3 Million Books in Print