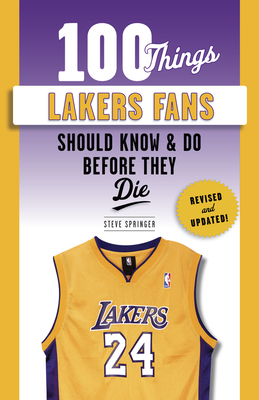 
Not On Our Shelves—Ships in 1-5 Days
(This book cannot be returned.)
Most Los Angeles Lakers fans have taken in a game or two at the Staples Center, have seen highlights of Magic Johnson and Kareem Abdul-Jabbar, or remember the epic battles with the Celtics in the 1980s. But only real fans know how the Lakers acquired Hot Rod Hundley, which hobby fascinated both Chick Hearn and Elgin Baylor, or the best place to grab a bite in LA before a game. Whether you were there for the Showtime era or started watching during Kobe Bryant's prime, this is the ultimate guide for Lakers faithful. Every essential piece of Lakers knowledge and trivia, as well as must-do activities, is ranked from 1 to 100, providing an entertaining and easy-to-follow checklist for those on their way to fan superstardom. This new edition is fully up to date, featuring Kobe's memorable farewell and the introduction of LeBron James in 2018.
Steve Springer is a former sportswriter who spent 25 years at the Los Angeles Times. He is the coauthor of Laker Girl, with Jeanie Buss, and American Son, with boxer Oscar De La Hoya, which made the New York Times bestseller list. He lives in Woodland Hills, California.

Bill Sharman was one of the first NBA guards to push his field-goal percentage above .400 for a season. He still ranks among the top free-throw shooters of all time, leading the league for a record seven seasons. In 1996, he was named to the NBA 50th Anniversary All-Time Team. He passed away in 2013.

James Worthy also known as “Big Game James,” was a seven-time NBA All-Star, three-time NBA champion, and the 1988 NBA Finals MVP with the Los Angeles Lakers. He was named one of the 50 Greatest Players in NBA History and was inducted into the Basketball Hall of Fame in 2003.