The Spencer Haywood Rule: Battles, Basketball, and the Making of an American Iconoclast (Hardcover) 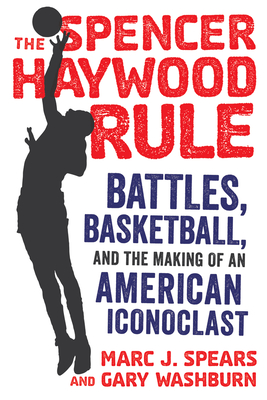 The Spencer Haywood Rule: Battles, Basketball, and the Making of an American Iconoclast (Hardcover)

“If you are a basketball fan, you should be aware of Spencer Haywood’s immense historical importance. If you’re not aware, you should be.” —Bob Ryan, The Boston Globe

Hall of Famer, Olympic gold medalist, MVP, and All-Star could all be used to describe the illustrious career of Spencer Haywood on the hardwood.

From picking cotton in rural Mississippi to the historic 1968 Olympics to Winning ABA MVP to the battle with the NBA that would go all the way to the Supreme Court and change the league forever, Spencer Haywood’s life has been a microcosm of 20th-century sports and culture.

One of the most dominant big men of his era, Haywood burst onto the international scene as a teenager with a revelatory performance at the Mexico City Olympics. Yet, while his basketball career was just beginning back in that summer of ’68, it was only one of many notable moments in the extraordinary and fateful life of the big man from Silver City, Mississippi.

In The Spencer Haywood Rule, Marc J. Spears of ESPN’s The Undefeated and Gary Washburn of The Boston Globe worked with Spencer to tell the remarkable story of a man who was born into indentured servitude in rural Mississippi, and all of the unbelievable trials, tribulations, successes, failures, and redemptions that followed.

Haywood would go on to be the ABA Rookie of the Year and MVP in the same season, but his triumphs on the court are only part of the legend. His winding journey off the court saw him challenge the NBA’s draft-entry rules and win at the Supreme Court level; run in New York City high-fashion circles in the mid-70s with his then-wife, supermodel Iman; and bottom out with alcohol and drug addiction during the infancy of the Showtime Lakers dynasty.

Spears and Washburn explore how Haywood’s impact was felt throughout the NBA and in society at large—and still is to this day—culminating in Haywood’s inspiring second act as an advocate for current and retired NBA players alike.

Marc J. Spears is the senior NBA writer for ESPN's The Undefeated. He is the co-producer of the documentary Katrina Cop In The Superdome. Gary Washburn is the National NBA writer for The Boston Globe. He also serves as the Vice President, Print for the NABJ Sports Task Force.
“Marc Spears and Gary Washburn tell this story beautifully.” —LA Times

“An important book on an under-appreciated Black athlete.” —Kevin Merida, The Undefeated

“If you are a basketball fan, you should be aware of Spencer Haywood’s immense historical importance. If you’re not aware, you should be. In either case you should read Gary and Marc’s book.” —Bob Ryan, The Boston Globe

“Haywood’s frank personality takes center stage, and he movingly talks about racism on and off the court.” –Publishers Weekly