Crossroads: I Live Where I Like: A Graphic History (KAIROS) (Paperback) 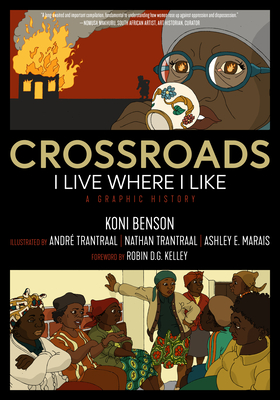 Crossroads: I Live Where I Like: A Graphic History (KAIROS) (Paperback)


Not On Our Shelves—Ships in 1-5 Days
Drawing on over sixty life narratives, it tells the story of women who built and defended Crossroads, the only African informal settlement that successfully resisted the apartheid bulldozers in Cape Town. The story follows women’s organized resistance from the peak of apartheid in the 1970s to ongoing struggles for decent shelter today. Importantly, the history was workshopped with contemporary housing activists and women’s collectives who chose the most urgent and ongoing themes they felt spoke to and clarified challenges against segregation, racism, violence, and patriarchy standing between the legacy of the colonial and apartheid past and a future of freedom still being fought for. Presenting dramatic visual representations of many personalities and moments in the daily life of this township, the book presents a thoughtful and thorough chronology and archival newspapers, posters, photography, pamphlets, newsletters, and documentary clips that further illustrate the significance of the struggles at Crossroads for the rest of the city and beyond.
Koni Benson is a historian, organizer, and educator. Robin D.G. Kelley is an American historian and academic. Ashley E. Marais is a comic book artist, designer, and painter. André Trantraal is a writer, illustrator, and translator. Nathan Trantraal is a poet, cartoonist, translator, and writer.