Jackson Rising Redux: Lessons on Building the Future in the Present (Paperback) 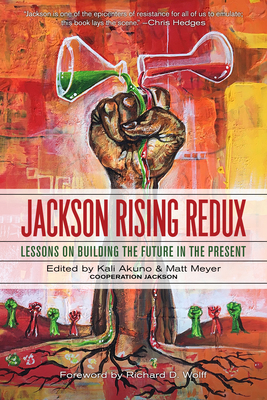 Jackson Rising Redux: Lessons on Building the Future in the Present (Paperback)

Mississippi is the poorest state in the US, with the highest percentage of Black people and a history of vicious racial terror. Black resistance at a time of global health, economic, and climate crisis is the backdrop and context for the drama captured in this new and revised collection of essays. Cooperation Jackson, founded in 2014 in Mississippi's capital to develop an economically uplifting democratic "solidarity economy," is anchored by a network of worker-owned, self-managed cooperative enterprises. The organization developed in the context of the historic election of radical Mayor Chokwe Lumumba, lifetime human rights attorney. Subsequent to Lumumba's passing less than one year after assuming office, the network developed projects both inside and outside of the formal political arena. In 2020, Cooperation Jackson became the center for national and international coalition efforts, bringing together progressive peoples from diverse trade union, youth, church, and cultural movements. This long-anticipated anthology details the foundations behind those successful campaigns. It unveils new and ongoing strategies and methods being pursued by the movement for grassroots-centered Black community control and self-determination, inspiring partnership and emulation across the globe.