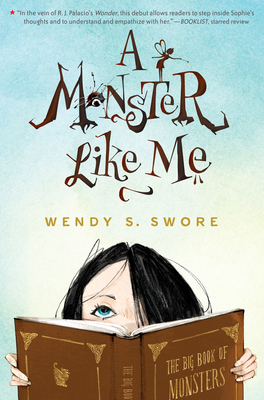 
In Stock—Click for Locations
There are trolls, goblins, and witches. Which kind of monster is Sophie? Sophie is a monster expert. Thanks to her Big Book of Monsters and her vivid imagination, Sophie can identify the monsters in her school and neighborhood. Clearly, the bullies are trolls and goblins. Her nice neighbor must be a good witch, and Sophie's new best friend is obviously a fairy. But what about Sophie? She's convinced she is definitely a monster because of the "monster mark" on her face. At least that's what she calls it. The doctors call it a blood tumor. Sophie tries to hide it but it covers almost half her face. And if she's a monster on the outside, then she must be a monster on the inside, too. Being the new kid at school is hard. Being called a monster is even harder. Sophie knows that it's only a matter of time before the other kids, the doctors, and even her mom figure it out. And then her mom will probably leave--just like her dad did. Because who would want to live with a real monster? Inspired by real events in the author's life, A Monster Like Me teaches the importance of believing in oneself, accepting change, and the power of friendship.

Wendy S. Swore and her family are farmers. She writes part-time, particularly in winter when her farming chores give her time to plant seeds in her imagination. She is a member of SCBWI. This is her debut novel.