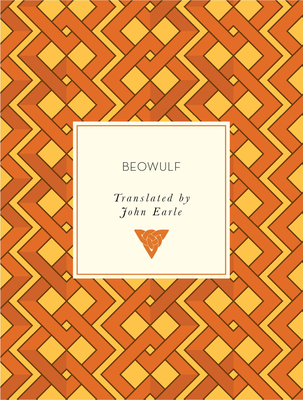 By John Earle (Translated by), Tom Schneider (Introduction by)


Special Order—Subject to Availability
In this elegant, portable Anglo-Saxon epic, the hero Beowulf fights horrifying, ghastly monsters in his bid to save the hall of Hrothgar, King of the Danes.

Composed by an anonymous Anglo-Saxon singer toward the end of the first millennium CE, Beowulf is an Old English epic tale recounting the adventures of Beowulf, a Geatish hero from present-day Sweden. He is called on by Hrothgar, King of the Danes, to defeat Grendel, the powerful monster that threatens his great hall.

As one of the earliest extant poems in a modern European language, it depicts a feudal world of blood, victory, and death--a world that exalts heroes who travel great distances to prove their strength, at impossible odds, against supernatural demons and beasts.

Ringing with the beauty, power, and artistry that have kept its poetry alive for a thousand years, this venerable tale is now available as an elegantly designed clothbound edition with an elastic closure and a new introduction from Tom Schneider.

The Knickerbocker Classics bring together the essential works of classic authors from around the world in stunning editions to be collected and enjoyed.

John Earle (1824–1903) was a British Anglo-Saxon language scholar and professor at the University of Oxford. He wrote more than a dozen books, including Two Saxon Chronicles Parallel (1865) and Anglo-Saxon Literature (1884).

Tom Schneider is a faculty member at California Baptist University, where he teaches English, including early British literature and epic poetry. He earned his Ph.D. in this subject from the University of California, Riverside. His ongoing research and writing is about medieval literature with a special interest in movement––from ideas about the nature of the quest to the way these stories create a sense of motion and rhythm for the reader. He lives in Riverside, California.