The Nightmare Before Dinner: Recipes to Die For: The Beetle House Cookbook (Hardcover) 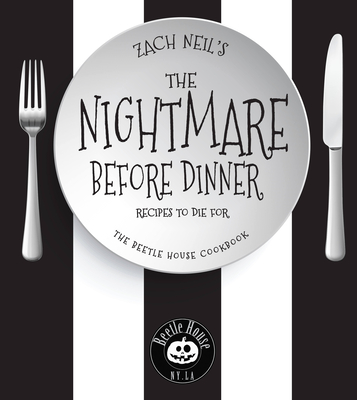 The Nightmare Before Dinner: Recipes to Die For: The Beetle House Cookbook (Hardcover)

Get your goth on with 60+ recipes from Beetle House restaurant, where guests indulge in a deadly delicious menu inspired by the works of Tim Burton and all things dark and curious.

If you delight in ghoulish frights and movies like The Nightmare Before Christmas, Beetlejuice, and The Evil Dead; then you’ll love the official cookbook of Beetle House, the Halloween-inspired restaurant with locations in New York and Los Angeles.

The Nightmare Before Dinner features more than 60 gothically delicious recipes from chef-owner Zach Neil, including sauces and dips for the recently deceased, eerie appetizers, sinister sides, soups and salads for the living, macabre mains, devilish desserts, deadly drinks, and creepy cocktails. Knock out your family, friends, and guests with:

Plus, if you’re vegan or vegetarian, The Nightmare Before Dinner has your spooky side covered too—it offers a vegan alternative or ingredient swap for each and every recipe in the book!

Throw your own goth-themed party! A bonus section provides inspiration for table settings, decorations, and foods to serve at your holiday or screening party.

This is the perfect cookbook for the Tim Burton movie buff, Halloween enthusiast, or goth in your life.

Zach Neil is an American entrepreneur, artist, and chef. He has been featured multiple times on the Food Network and has gained additional notoriety through his popular chains of themed restaurants, which have been featured on Watch What Happens Live with Andy Cohen, Good Day New York, MSNBC, and ABC World News Tonight, among others. Zach combined his artistic pursuits with his culinary skills to create the eclectic, Halloween-themed Beetle House restaurants, which have broken media records in the restaurant space. His first cookbook, The Nightmare Before Dinner: Recipes to Die For, features all of the Beetle House recipes, plus a selection of brand new, never-before-seen dishes with seasonally inspired flavors and a dash of Gothic insanity. In addition to his restaurant franchises, Neil is considered an authority on pop-up bars and restaurants with his own television programming and lifestyle brands in the works. You can find Zach on Instagram @therealzachneil and learn more about the Beetle House restaurants at beetlehousela.com.