Running the Salt: Final Battle of the Civil War (Paperback) 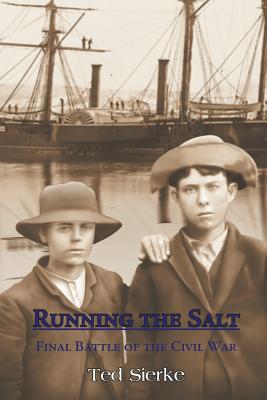 Running the Salt: Final Battle of the Civil War (Paperback)


Not On Our Shelves—Ships in 1-5 Days
(This book cannot be returned.)
Set against the backdrop of the last year of the Civil War and the first two years of Reconstruction along the Gulf Coast, Running the Salt relates the exploits of two teenage boys who leave home to fight in the Battle of Blakeley, the war's last major battle, located in Alabama along the eastern shore of the Mobile River Delta. Billy McCool, thirteen, and Seth Rowan, seventeen, are desperate for a chance to jump headfirst into manhood. As Union troops close in on the last Confederate defenders of Mobile, the boys are itching to join the war before it ends. With a pistol that Billy inherited from his grandfather, and using Seth's canoe, the boys manage to show up on the battlefield, but are captured and imprisoned on an island in the Mississippi Sound. Escaping to New Orleans, Seth and Billy befriend a genteel widow who hires them for several dangerous missions, the last of which involves running the Union blockade in and out of the Port of Mobile, Alabama. The late Ted Sierke, a native of the Gulf Coast where his novel is set, attributed his penchant for storytelling to his grandfather, a German immigrant. After graduating from the University of Alabama with a degree in anthropology, the author taught high school and wrote a book titled Lost Villages and Ancient Kingdoms about native cultures inhabiting the Gulf Coast. This book was used as a teaching aid in the Alabama Public High School System. Publisher's website: http: //sbprabooks.com/TedSierke.