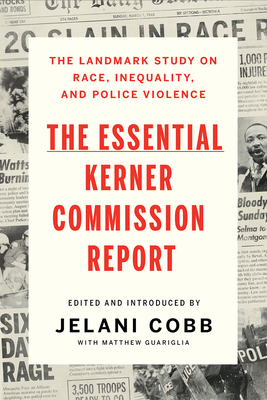 Recognizing that an historic study of American racism and police violence should become part of today’s canon, Jelani Cobb contextualizes it for a new generation.

The Kerner Commission Report, released a month before Martin Luther King Jr.’s 1968 assassination, is among a handful of government reports that reads like an illuminating history book—a dramatic, often shocking, exploration of systemic racism that transcends its time. Yet Columbia University professor and New Yorker correspondent Jelani Cobb argues that this prescient report, which examined more than a dozen urban uprisings between 1964 and 1967, has been woefully neglected.

In an enlightening new introduction, Cobb reveals how these uprisings were used as political fodder by Republicans and demonstrates that this condensed edition of the Report should be essential reading at a moment when protest movements are challenging us to uproot racial injustice. A detailed examination of economic inequality, race, and policing, the Report has never been more relevant, and demonstrates to devastating effect that it is possible for us to be entirely cognizant of history and still tragically repeat it.

A staff writer at The New Yorker, Jelani Cobb was a former student of Stanley Crouch.

A staff writer at The New Yorker, Jelani Cobb was a former student of Stanley Crouch.
This version of the landmark report features a superb introduction by Cobb and a closing section of frequently asked questions—e.g., ‘How come nothing has been done about these problems?’ The book contains plenty of fodder for crucial national conversations and many excellent ideas for much-needed reforms that could be put into place now. A welcome new version of a publication that is no less important now than it was in 1967.
— Kirkus Reviews, starred review

New Yorker staff writer Cobb (The Substance of Hope) presents an astutely abridged and incisively contextualized version of the 1968 Kerner Commission Report . . . Cobb’s concise introduction delves into the origins of the commission and highlights key findings . . . The report itself is startlingly blunt . . . and remarkably prescient . . . In the appendix, Cobb briskly and persuasively tackles 'frequently asked question' . . . The result is an essential resource for understanding what Cobb calls the 'chronic national predicament' of racial unrest.

With a perceptive introduction by historian Cobb... this version of the report, co-edited by historian Guariglia, is indeed essential for what it presents and why its findings still matter... this version of the report might point the way toward a national resolution, if the United States summons the will and wherewithal to make change.
— Randall M. Miller - Library Journal