King Arthur and the Knights of the Round Table (Hardcover) 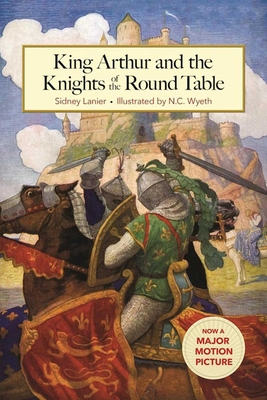 King Arthur and the Knights of the Round Table (Hardcover)


Not On Our Shelves—Ships in 1-5 Days
King Arthur’s stories are timeless tales that have been told countless times since the fifteenth century when Sir Thomas Malory introduced them in Le Morte d’Arthur. The basis for the upcoming film, this collection is retold by famed American poet and author Sidney Lanier. He imbues the legendary stories with action and adventure, accompanied by N. C. Wyeth’s breathtaking illustrations.

Readers will enjoy the daring exploits of Arthur and his knights. You’ll find the tale of how Arthur pulled the sword from the stone to become king of England and be introduced to his brave knights Sirs Launcelot, Gawaine, Tristram, Galahad, and more. Their search for the Holy Grail through the tragic final battle will thrill you and capture your imagination.

The Arthurian legends are coursing with drama and adventure. Instilled with themes of loyalty, conflict, romance, and courage, these stories will fill readers of any age with wonder. Experience them in this edition of King Arthur and the Knights of the Round Table.
Sidney Lanier was born February 3, 1842 in Macon, GA. He rose to prominence as an American musician, poet and author. As a poet he was know for his use of dialects. He eventually became a university professor at John Hopkins University in Baltimore, MD. He published a series of lectures entitled The English Novel (published posthumously in 1883) and a book entitled The Science of English Verse (1880), in which he developed a novel theory exploring the connections between musical notation and meter in poetry. He died September 7, 1881 in Lynn, NC from an extended struggle with tuberculosis.

N.C. Wyeth, born Newell Convers Wyeth, was an American artist and illustrator. He was the pupil of artist Howard Pyle and became one of America’s greatest illustrators. During his lifetime, Wyeth created more than three thousand paintings and illustrated 112 books, twenty-five of them for the Scribner Classics series, which are the works for which he is best known. He died on October 19, 1945.