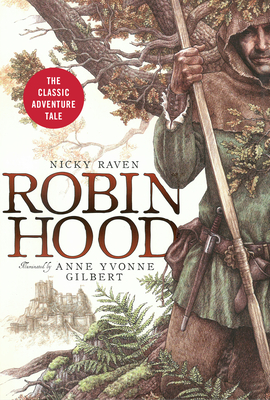 
Special Order—Subject to Availability
A beautifully illustrated edition of the classic adventure tale!
Venture into Sherwood Forest with Robin Hood and his band of rebel outlaws, as they fight against injustice and the evil plotting of Guy of Gisburn.
In this captivating tale, Robin Hood must defy the law and face danger to battle corruption, guard the rights of the oppressed, and protect the woman he loves. This new telling combines elements of the many tales surrounding the legendary Robin Hood with modern storytelling.
Lavishly illustrated throughout by award-winning artist Anne Yvonne Gilbert and presented in a beautiful jacketed format, this fine edition will appeal to lovers of the legend and newcomers to the story alike.
Nicky Raven is an adapter and author of children's books. He lives in the United Kingdom.
Anne Yvonne Gilbert is a British artist and book illustrator. While much of her career has focused on illustrating the covers and interiors of popular children's books, her commissions have included three sets of postage stamps for the Royal Mail and the album cover for Frankie Goes to Hollywood's single "Relax." She lives in the United Kingdom.
Otto Bathurst is a film and television director, known for Robin Hood (2018), Peaky Blinders (2013) and Black Mirror (2011). He lives in the United Kingdom.