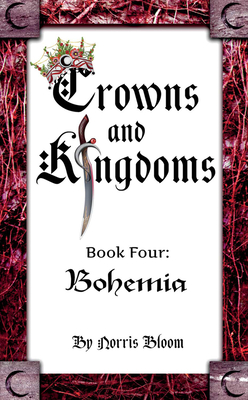 This is book number 4 in the Crowns and Kingdoms series.

The fourth book of Norris Bloom's Crowns and Kingdoms series follows Adela as she reluctantly agrees to travel with Aegis of Bohemia to his distant kingdom. Once there, she discovers that Bohemia is a poor nomadic kingdom with many unusual customs. Unable to refuse the crown, she becomes the queen of the gypsies, but struggles to solve the problems facing the Bohemian people. Far worse, gypsy code demands that she be married within a year. Adela's worst fears become reality when she realizes that her future lies solely in the hands of the drabarni--the wise couple of the kingdom.
Norris Bloom is a retired school teacher and basketball coach. She taught 5th and 6th grade in the United States before relocating to Upper Basildon, England for 6 years where she developed a love of the English countryside and its people. Additionally, she traveled extensively throughout Europe, feeling a kindred spirit to the long ago kings and queens that once roamed the castles dotted throughout Europe. Crowns and Kingdoms is her first series showcasing her love of middle school aged children and medieval folklore. Norris currently lives in San Francisco, Ca with her husband Ken and dog Mojo. In her spare time she enjoys traveling, cooking, music, sports and spending time at her cottage on Lake Tulloch, Ca.