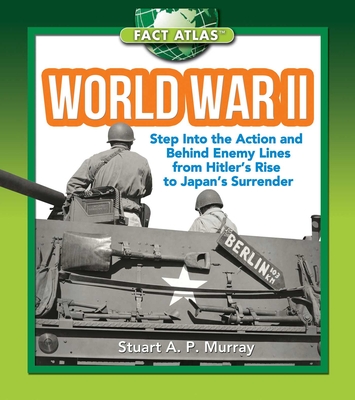 
Not On Our Shelves—Ships in 1-5 Days
The Fact Atlas series offers an age-appropriate overview of the historic and world-changing events of World War II, covering everything from the rise of Hitler and Nazism to the tragedy of the Holocaust and its long-lasting effects. Readers will be introduced to key players—political and military leaders like Winston Churchill and Franklin Roosevelt as well as Joseph Stalin, Benito Mussolini, and many more. Explore the ideas of democracy versus totalitarianism and international relations as a whole during the 1930s. Learn more about the different countries that became involved in the Second World War, with a focus on most of Europe, the United States, and Japan. Lesser-known facts about the involvement of countries such as China, Libya, Ethiopia, and New Zealand make it very clear that the war touched all corners of our world.

Accompanied by photos and maps to outline specific events, this book offers a careful breakdown of how the war played out globally. Battles and campaigns are explained and examined, and young readers will be able to follow the war from beginning to end, analyzing causes and effects of each important event. World War II gives young readers the opportunity to grasp the weight and magnitude of one of the very worst wars the world has seen.
Stuart A. P. Murray is the author of more than forty books. He is a former journalist as well as a book editor. He was the founding editor of Bantam’s Stagecoach series of Westerns, writing under the pseudonym Hank Mitchum. Murray is a principal in Lily Book Productions, a book publisher and packager in Red Hook, New York. He lives in Petersburgh, New York.
"A good choice for libraries in need of a general introduction to World War II."—School Library Journal

"A good choice for libraries in need of a general introduction to World War II."—School Library Journal