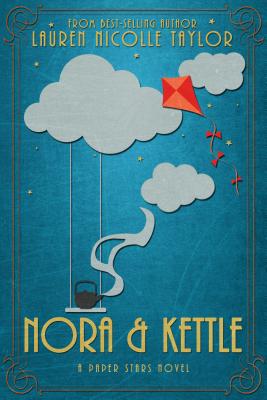 This is book number 1 in the A Paper Stars Novel series.

Fans of Eleanor & Park and The Book Thief will love this startling and heart-warming take on Peter Pan.

What if Peter Pan was a homeless kid just trying to survive, and Wendy flew away for a really good reason?

Seventeen-year-old Kettle has had his share of adversity. As an orphaned Japanese American struggling to make a life in the aftermath of an event in history not often referred to—the internment of Japanese Americans during World War II and the removal of children from orphanages for having "one drop of Japanese blood in them"—things are finally looking up. He has his hideout in an abandoned subway tunnel, a job, and his gang of Lost Boys.

Desperate to run away, the world outside her oppressive brownstone calls to naïve, eighteen-year-old Nora—the privileged daughter of a controlling and violent civil rights lawyer who is building a compensation case for the interned Japanese Americans. But she is trapped, enduring abuse to protect her younger sister Frankie and wishing on the stars every night for things to change.

For months, they've lived side by side, their paths crossing yet never meeting. But when Nora is nearly killed and her sister taken away, their worlds collide as Kettle, grief stricken at the loss of a friend, angrily pulls Nora from her window.

In her honeyed eyes, Kettle sees sadness and suffering. In his, Nora sees the chance to take to the window and fly away.

Set in 1953, NORA AND KETTLE explores the collision of two teenagers facing extraordinary hardship. Their meeting is inevitable, devastating, and ultimately healing. Their stories, a collection of events, are each on their own harmless. But together, one after the other, they change the world.

"Teens Nora and Kettle endure hardships while leading two different lives in 1950s America. She lives in a brownstone; he, on the streets. But, at their very cores, they share a common need: survival. Nora lives in constant fear and has the bruises to prove it. She'll do anything to protect her younger sister, Frankie, from their abusive father, ironically a civil rights attorney. When Nora's mother dies after a fall, Nora's last fragment of security is shattered. Kettle, an orphan and part Japanese-American, must deal with attitudes fresh from World War II that still believe he's the enemy. He and his best friend—practically a brother—Kin, both Japanese-American internment-camp detainees, now take care of the Kings, a group of homeless boys (and one girl), who proudly rename themselves with K names. Endearingly loyal and responsible, Kettle works dangerous dock jobs to pay for groceries, toothbrushes, and Slinkys for his Kings. An act of purging finally brings Nora and Kettle together. Although it takes a while (the book's middle) before these two lost souls meet, their chemistry becomes palpable and gives the narrative a good jolt. Kettle's camp flashbacks feel short and in need of deepening to reflect his injustice; in contrast, Nora's violent encounters with her father, written with care, grip the heart. A complicated, unlikely friendship with an ending that feels simplified." — Kirkus Reviews

"World War II is over, but community feelings toward Japanese Americans still run high, and two very different teens are struggling to live in the aftermath. Seventeen-year-old Kettle has been an orphan living on the streets for years, working the docks when he can and trying to care for other street children alongside his brother, Kit. Nora, on the other hand, is the daughter of a wealthy, big-name civil rights lawyer, but that does not protect her from his violent beatings behind closed doors. Existing side by side without knowing it, Kettle and Nora’s paths cross one night, and suddenly everything changes. Lyrically written, this powerful and at times painful read captures the reader and does not let go. Told in alternating chapters from the two characters’ perspectives, their respective narratives cross and intertwine, drawing Nora and Kettle closer until they finally unite. Parallels to Peter Pan and Wendy provide motif and depth without overwhelming the reader. Firmly rooted in the history of internment camps and racial prejudice, this remarkable novel educates subtly while focusing on themes of home, acceptance, courage, and the danger of secrets." — Melissa Moore, Booklist - Starred