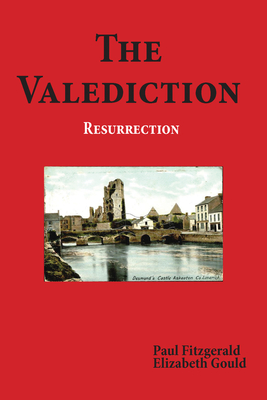 
Not On Our Shelves—Ships in 1-5 Days
Afghanistan was an American crusade to win the war against “Evil Empire” and remake the world in its own image. This goes right to the heart of understanding the destiny of the Western Dream. Instead of a dream the US has been caught in a nightmare. Now Americans long for a spiritual regeneration away from the vision of war as an honorable sacrifice to a vision of peace that serves all. No one seems to be able to make the political process move in the right direction. We assimilated a profound understanding of how to envision moving from war to peace from our 40 year experience with the Afghan story.

The Valediction-Resurrection combines the esoteric qualities of The Ninth Gate and Field of Dreams as Paul Fitzgerald’s mind is opened to the unexplored role that the mysticism of Afghanistan played in drawing him into its vortex. That investigation begins with his search into his Fitzgerald family’s participation in the 12th century Norman invasion of Ireland. The story comes full circle when Paul fulfills his deepest purpose by connecting the land of his Geraldine ancestors to the ground of Afghanistan in a very personal and mystical way. It reads like a novel but it all really happened!

As we dug into our Fitzgerald family history we discovered the bitter struggle for power within the Anglo/Norman deep-state that has raged beneath the surface down through the centuries. On November 22, 1963 Americans were shocked by the public execution of John Fitzgerald Kennedy. In the years since every manner of conspiracy theory has been advanced to explain what happened. But killing the only Roman Catholic President of the United States on the site of the first Masonic Temple in Dallas on the Masonic day of revenge for the destruction of the Knights Templar (November 22) bespeaks a ritual. If the assassination could have been an act of retribution for an eight hundred year old vendetta then we all must begin to view history from a more complex perspective. In order to understand a "deep-state," we must all begin to ask "deep-questions" and be willing to accept "deep-answers," no matter where they lead. The best book to start that investigation is The Valediction-Resurrection. It delivers!
Paul Fitzgerald and Elizabeth Gould, a husband and wife team, began working together in 1979 co-producing a documentary titled, The Arms Race and the Economy, A Delicate Balance. In 1981 they acquired the first visas to enter Afghanistan granted to an American TV crew. Following their news story for the CBS, they produced a documentary (Afghanistan Between Three Worlds) for PBS and in 1983 they returned to Kabul for ABC Nightline with Harvard Negotiation Project director, Roger Fisher. Starting in 1992 through 1995 they worked on the film version of their experience under contract to Oliver Stone. In 1998 they started collaborating with Afghan human rights expert Sima Wali. Along with Wali, they contributed to the Women for Afghan Women: Shattering Myths and Claiming the Future project published by Palgrave Macmillan (2002). In 2002 they filmed Wali's first return to Kabul since her exile in 1978 and produced a film about that journey titled The Woman in Exile Returns. Their book, Invisible History: Afghanistan’s Untold Story, published by City Lights (2009), lays bare why it was inevitable that the Soviet Union and the U.S. should end up in Afghanistan. Crossing Zero The AfPak War at the Turning Point of American Empire, published by City Lights (2011), lays out the contradictions of America’s AfPak strategy. Their novel The Voice, published in 2001, is the esoteric side of their Afghan experience. They continued to research and publish articles. In 2021 they completed the weaving together of their factual and mystical story in The Valediction: Three Nights of Desmond Book 1 published by Trine Books (2021).
Oliver Stone expressed these thoughts to the authors about their work, “Going back to Afghanistan right now is a long, long journey. Although I’ve never been there in person, I feel like I’ve been there through your minds.”

"A probing history of the country and a critical evaluation of American involvement in recent decades . . . A fresh perspective on a little-understood nation." —Kirkus


“The Voice takes its audience on a quest for the real Holy Grail, entwining scientific mythology with geopolitical intrigue in an esoteric thrill-ride Dan Brown couldn't dream up...” —Michael Hughes, Huffpost Books

"Paul Fitzgerald and Elizabeth Gould have seen the importance of the 'Great Game' in Afghanistan since the early 1980s. They have been most courageous in their commitment to telling the truth—and have paid a steep price for it." —Oliver Stone

"Fitzgerald and Gould have consistently raised the difficult questions and inconvenient truths about western engagement in Afghanistan. While many analysts and observers have attempted to wish a reality on a grim and tragic situation in Afghanistan, Fitzgerald and Gould have systematically dug through the archives and historical record with integrity and foresight to reveal a series of misguided strategies and approaches that have contributed to what has become a tragic quagmire in Afghanistan.” —Professor Thomas Johnson, Department of National Security Affairs and Director, Program for Culture and Conflict Studies, Naval Postgraduate School, Monterey California

“A ferocious, iron-clad argument about the institutional failure of American foreign policy in Afghanistan and Pakistan.” —Daniel Ellsberg

"Crossing Zero is much more than a devastating indictment of the folly of U.S. military intervention in Afghanistan. Paul Fitzgerald and Elizabeth Gould demonstrate that the U.S. debacle in Afghanistan is the predictable climax of U.S. imperial overreach on a global scale. Like their earlier work documenting the origins of U.S. involvement in Afghanistan during the Cold War, Crossing Zero deserves the attention of all serious students of U.S. foreign policy." —Selig S. Harrison, Co-author with Diego Cordovez of Out of Afghanistan: The Inside Story of the Soviet Withdrawal

"I loved it. An extraordinary contribution to understanding war and geo-politics in Afghanistan that will shock most Americans by its revelations of official American government complicity in using, shielding, sponsoring and supporting terrorism. A devastating indictment on the behind-the-scenes shenanigans by some of America’s most respected statesmen" —Daniel Estulin, author of The True Story of the Bilderberg Club