How to Be a Dictator: The Cult of Personality in the Twentieth Century (Hardcover) 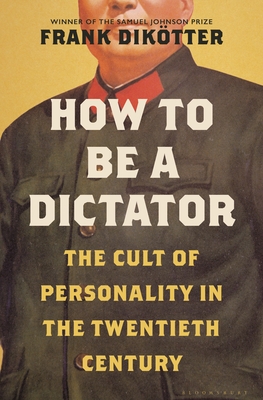 How to Be a Dictator: The Cult of Personality in the Twentieth Century (Hardcover)

From the Samuel Johnson Prize-winning author of Mao's Great Famine, a sweeping and timely study of twentieth-century dictators and the development of the modern cult of personality.

No dictator can rule through fear and violence alone. Naked power can be grabbed and held temporarily, but it never suffices in the long term. In the twentieth century, as new technologies allowed leaders to place their image and voice directly into their citizens' homes, a new phenomenon appeared where dictators exploited the cult of personality to achieve the illusion of popular approval without ever having to resort to elections.

In How to Be a Dictator, Frank Dikötter examines the cults and propaganda surrounding twentieth-century dictators, from Hitler and Stalin to Mao Zedong and Kim Il Sung. These men were the founders of modern dictatorships, and they learned from each other and from history to build their regimes and maintain their public images. Their dictatorships, in turn, have influenced leaders in the twenty-first century, including Vladimir Putin, Xi Jinping, and Recep Tayyip Erdogan.

Using a breadth of archival research and his characteristic in-depth analysis, Dikötter offers a stunning portrait of dictatorship, a guide to the cult of personality, and a map for exposing the lies dictators tell to build and maintain their regimes.

Frank Dikötter is Chair Professor of Humanities at the University of Hong Kong. Before moving to Asia in 2006, he was Professor of the Modern History of China at the School of Oriental and African Studies, University of London. He has published nine books about the history of China, including Mao's Great Famine, which won the BBC Samuel Johnson Prize for Non-fiction in 2011.
http://www.frankdikotter.com/

"How to Be a Dictator hits the perfect balance between popular and scholarly, and it’s difficult to imagine the reader who wouldn’t learn from it and enjoy the ride. Dikötter’s book is anti-communist and anti-authoritarian in its politics, but more importantly it is historically detailed and compelling in its chronicling of how dictators set about organizing an entire society around their own glorification and power. He makes his points in fresh ways and is careful to bring in fresh details. When he covers less famous dictatorships, like Mengistu’s Ethiopia, he brings the same sensibility, but he is never obscure." - Tablet Magazine

"How to Be a Dictator takes off from a conviction, no doubt born of [Dikötter’s] Mao studies, that a tragic amnesia about what ideologues in power are like has taken hold of too many minds amid the current ‘crisis of liberalism.’ And so he attempts a sort of anatomy of authoritarianism, large and small, from Mao to Papa Doc Duvalier. Each dictator’s life is offered with neat, mordant compression. Dikötter’s originality is that he counts crimes against civilization alongside crimes against humanity." - New Yorker

"Monuments crumble and statues fall, but How to Be a Dictator succeeds in identifying how and why linguistic domination has lasting power." - Paste

"If [The Cultural Revolution] were widely circulated in China, it could undermine the legitimacy of the current regime . . . This book is a significant event in our understanding of modern China." - New York Times Book Review on THE CULTURAL REVOLUTION

"A fine, sharp study of this tumultuous, elusive era . . . [An] excellent follow-up to his groundbreaking previous work . . . Dikötter tells a harrowing tale of unbelievable suffering. A potent combination of precise history and moving examples." - Starred review, Kirkus Reviews on THE CULTURAL REVOLUTION

"For those who have swallowed the poisonous claim that the Communist Party deserves some credit for China's current patchy prosperity, Mr. Dikötter provides the antidote." - Wall Street Journal on THE CULTURAL REVOLUTION

"Dikötter's well-researched and readable new book on the Cultural Revolution's causes and consequences is a crucial reminder of the tragedies, miscalculations and human costs of Mao's last experiment." - The Guardian on THE CULTURAL REVOLUTION

"Fluent, compelling and based on a wide range of evidence." - Financial Times on THE CULTURAL REVOLUTION