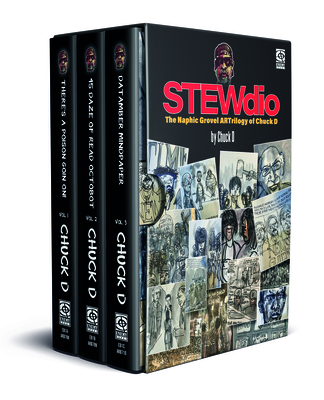 Legendary hip-hop artist and social activist Chuck D has used every opportunity in his groundbreaking career to stand up for civil rights. His rap group Public Enemy is widely regarded as a revolutionary act both in terms of its impact on hip-hop and its use of music to impart a message of race and class equality. The band emerged from the late 1970s/early '80s coalescence of rap, punk, and street art into hip-hop music culture on the East Coast. At the time, Chuck D had completed his BFA in graphic design, and while his music career exploded, his passion for visual art never left his heart.

In February 2020, he turned his gaze once again to the page, and began to fill three 5 x 8 journals with his written and drawn reflections of a world beginning to unravel. StewDio: The Naphic Grovel ARTrilogy of Chuck D recreates format of his original art, combining three full-color paperback bound books into a beautiful box set. The box set is the inaugural offering from Enemy Books, the new Akashic Books imprinted curated by Chuck D.

Spanning the onset of COVID-19 through the first year of the Joe "Bye-Don" administration, Chuck D lends his powerful artistic voice to one of the most tumultuous periods in American history, and puts it in a capsule. Like the neo-expressionist graffiti art of Jean-Michel Basquiat, Chuck D's energetic "Naphic Grovels" marry text with drawings, commenting on contemporary events with the same activist instinct that propelled Public Enemy's "music-with-a-message" reputation. His inventive, Amiri Baraka-esque language and accompanying art is also occasionally used as a tool for introspection, providing unparalleled insight into one of the most important cultural figures of our time.

Each journal follows a distinct period in Chuck D's (and America's) life; There's a Poison Goin' On chronicles the onset of the COVID-19 pandemic, from February-April 2020; 45 Days of Red October follow the days leading up to and the aftermath of the historic 2020 election; and Datamber Mindpaper, which focuses on the early days of the Biden administration.

No song may be more reflective of 1980s America than Public Enemy's "Fight the Power;" no document may come to capture our COVID era like Chuck D's StewDio.

Chuck D is the leader and cofounder of the legendary rap group Public Enemy, a social activist, multimedia producer, visual artist, and digital music pioneer. He has been featured in more than one hundred documentaries on music, technology, politics, and race, and cocurated the Smithsonian Anthology of Hip-Hop and Rap. He has also been a national spokesperson for Rock the Vote, the National Urban League, Americans for the Arts, and the National Alliance of African American Athletes. As part of Public Enemy, he was inducted into the Rock & Roll Hall of Fame and earned a Grammy Lifetime Achievement Award.