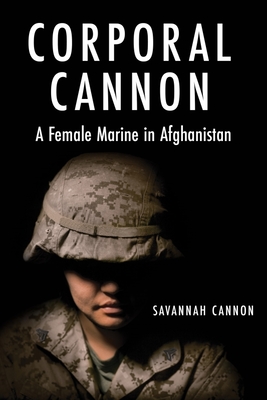 
Not On Our Shelves—Ships in 1-5 Days
"...a dramatic, sobering account of prejudice and the mistreatment of women in combat zones. - Publishers Weekly

Not even old enough to drink, Corporal Savannah Cannon is a young enlisted United States Marine deployed to support Operation Enduring Freedom in Afghanistan in 2010. As a tactical data networking specialist, she is sent away from everyone she knows and attached to a Regimental Combat Team where women are not allowed to repair communications. Her experiences over the next few months shed light on the unique and difficult positions women are placed in when supporting combat roles, while offering a raw look at the painful choices women must sometimes make.

Cannon finds herself in a combat zone, ostracized from family, friends, and even her fellow Marines as the men are told to avoid her. The connections she makes are born from trauma and desperation and the choices she makes will echo throughout many lives.

Corporal Cannon is not the story of a heroine; it is the hard-hitting account of just one of the flawed individuals who make up the United States' fighting forces. Mistakes in the battlefield can have dire consequences, personally and professionally. Reflecting on her time in service, the author weaves a story of past and present, and the healing that can come with admitting our mistakes and moving past them.