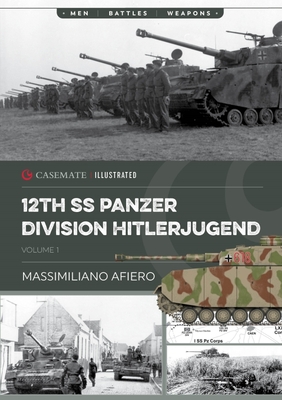 
Not On Our Shelves—Ships in 1-5 Days
A fully illustrated account of the infamous 12th SS Panzer Division Hitlerjugend, from their formation through to the fierce battles for Caen.

The 12th SS Panzer Division Hitlerjugend was formed in 1943 from members of the Hitler Youth who had been born in 1926, primarily as an emergency response force in France to repel the expected Allied invasion from the sea. Training was initially haphazard due to lack of equipment, however in March 1944 it was attached to I SS Panzer Corps and transferred to Normandy. Based around Caen, it was intended to repel a possible and expected invasion from the sea. When the invasion came in June, it was one of the two closest panzer divisions to the landing beaches, engaging Allied paratroopers at dawn. Once the Allied bridgehead was established, Hitlerjugend deployed to Caen.

The defensive battles that took place in Normandy, particularly the four battles around the city of Caen, saw the young soldiers of the Hitlerjugend demonstrate determined resistance, conceding only due to being greatly outnumbered.

Packed with photographs, maps and profiles, this Casemate Illustrated follows the actions of the 12th SS Panzer Division through formation and training to the four battles for Caen.