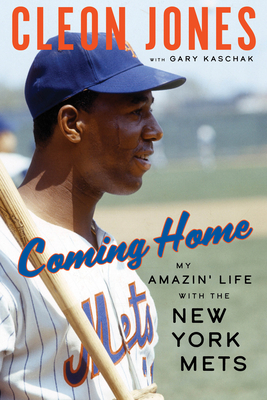 Cleon Jones has never forgotten where he came from. As a child, growing up in a Mobile, Alabama shotgun house with no electricity or running water, he yearned to follow the path of hometown heroes Satchel Paige and Hank Aaron, and his community uplifted him.

Navigating the perilous norms of the Jim Crow South, Jones ascended to baseball's highest ranks, leading the 1969 New York Mets with his bat and catching the final out to clinch the "miracle" World Series title. But after 13 years in the major leagues, Jones returned to the place he loves, the neighborhood where it all started: Africatown.

Coming Home is Jones's love letter to his roots in Alabama's most historic Black settlement, whose origins can be traced back to the last known illegal transport of slaves to the United States aboard the Clotilda. Jones candidly discusses how his Africatown neighbors helped supply him with a bat and glove when his family could not afford equipment, the opposition he faced as a Black player after leaving Alabama, his fond memories of the Miracle Mets, and his post-baseball fight to save his dying community.

Also featuring Jones's outlook on the modern game and American society, this timely chronicle is a profound slice of history for all baseball fans.
Cleon Jones played 13 seasons in Major League baseball, winning a World Series with the 1969 "Miracle Mets." With The Last Out Community Foundation, Jones now works to refurbish and build affordable homes, combat blight, and provide positive youth programs for the Africatown community in Mobile, Alabama.

Gary Kaschak has served as sports writer and columnist for The Vestal News (upper New York state), The Green Bay Press Gazette (Wisconsin), and The Burlington County Times (New Jersey). He served The Montrose Independent (Pennsylvania) as its Sports Editor and has also reported for WKOP radio in Binghampton, New York.