Fixing Food: An FDA Insider Unravels the Myths and the Solutions (Hardcover) 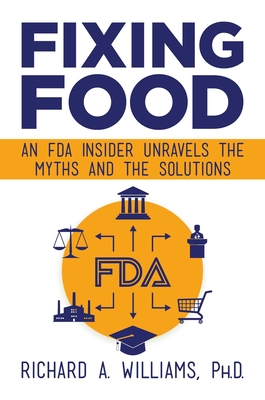 Fixing Food: An FDA Insider Unravels the Myths and the Solutions (Hardcover)

By Richard A. Williams, Ph.D.


Not On Our Shelves—Ships in 1-5 Days
An FDA economist discovers that solutions for food safety and nutrition lie in the hands of entrepreneurs—not government regulation and education.

With about half of the U.S. population expected to be obese by 2030 and one out of six Americans getting sick every year, why is the Food and Drug Administration spending years trying to figure out if almond milk should be called “milk”? As a twenty-seven-year veteran of the FDA’s Center for Food Safety and Nutrition, Dr. Richard A. Williams poses this question.

Dr. Williams also questions the accuracy of more than thirty years of food labeling, coupled with consumer education on diet/disease relationships and failed attempts to get consumers to track intakes. It is time for the American people to look elsewhere for solutions, rather than relying on the FDA.

Fixing Food takes you inside the FDA and explores the inner workings that drove failed strategies. Following his tenure at the FDA, Dr. Williams spent more than a decade investigating new sciences—including genetic and microbial sciences—that are leading to innovative foods and products. With one of the greatest public health crises in American history ongoing, this research aims to solve our issues with food—once and for all.

In this book, you will learn:
• How FDA controls Congress, the Courts, and the Executive Branch and others who might be a threat to their resources and growth of power
• How the FDA misuses risk assessment and cost-benefit analysis
• How the FDA’s most recent innovation to keep food safe is fifty years old
• Why food labeling has been a disaster
• How entrepreneurs are remaking foods to be safer and healthier
• How new medical devices will ultimately make nutrition as easy as using a cell phone
• How trying to educate consumers through food labeling has been a public health disaster

Ultimately, the role of the FDA in the new world of food safety and nutrition must change if the agency is to stay relevant.
Dr. Richard A. Williams was at the FDA’s Center for Food Safety and Nutrition for twenty-seven years. He ended up as the Director of Social Science and received the agency’s highest honor: the Award of Merit. Since leaving the agency, he has continued to study and write about food safety issues and has written professional articles in the Risk Analysis, the Journal of Food Science and Technology, Regulation magazine, and the Dickinson Law Review. He has written op-eds for the New York Times, USA Today, the Wall Street Journal, and the Chicago Tribune. He has appeared on television (CNN, C-SPAN) and radio (The Diane Rehm Show, NPR). Dr. Williams has given presentations throughout the U.S., Europe, South Korea, Australia, and China on food safety and nutrition issues. He regularly gives talks at the Society for Risk Analysis and Arizona State Universities Governance of Emerging Technologies and Science conference, in addition to the food industry and various academic settings.
"Dr. Williams offers a scathing—and justified—indictment of the FDA, the nation's most powerful regulatory agency. From his decades of experience as a senior food regulator there, he provides numerous examples of bureaucrats making decisions about the U.S. food supply that protect their own jobs, reputations, and budgets, rather than public health.”
— Henry I. Miller, M.S., M.D., Former Founding Director of the FDA’s Office of Biotechnology

“The FDA does very little to keep our food safe or address obesity or the other evolving dietary challenges Americans face. Instead, the ‘food bureaucrats’ are extremely good at issuing and enforcing regulations that restrict trade, drive consumer costs up, and advance the FDA’s power and budget with your tax dollars. Richard Williams’ brilliant exposé, taken from his long and distinguished career fighting the good fight within the FDA, is brilliant, insightful, and poignant. At times, it’s laugh-out-loud funny, but you feel guilty laughing because the bureaucratic stupidity at work affects real people—us."
— Ret. Brigadier General Dale Waters, USAF and Military Executive and Director for Military Support and Operations, National Geospatial-Intelligence Agency

“In Fixing Food, Richard Williams has provided something truly unusual. Taking us inside the FDA bureaucracy, where he worked as an economist for decades, he’s given us a well-written, often entertaining, highly informative account of both meaningful and meaningless efforts to make our food safer and better. Whether you are an economist, policy nerd, politician, or just a good old consumer who wants to know more, if you start reading, I am betting you won’t stop till you finish the last chapter.”
— Bruce Yandle, Dean Emeritus, College of Business & Behavioral Science, Clemson University and former Executive Director, U.S. Federal Trade Commission

“This is an eye-opening account of efforts to bring risk analysis and economics into federal food safety regulation. Told by a veteran insider of the FDA, the book is a must read for anyone interested in food safety or the federal rulemaking process.”
— The Honorable John Graham, Former Administrator of the Office of Information and Regulatory Affairs, Office of Management and Budget; former Dean of the Indiana University O’Neill School of Public Health and founder of the Harvard Center for Risk Analysis

“The Food and Drug Administration, established in 1906, was the first federal regulatory agency devoted to health and safety. So why, after more than a century, have foodborne illnesses-per-capita remained unchanged and has obesity increased? In Fixing Food: An FDA Insider Unravels the Myths and the Solutions, Richard Williams addresses those questions with a tell-all account of the dysfunction and misaligned incentives of the agency where he worked for almost three decades. With amusing anecdotes and war stories of battles he lost and won, Williams reveals the bureaucratic infighting, political maneuvering, and interest group influence that he concludes undermine food policies today. He then offers a path forward, abandoning the tired approaches of the last century and embracing new technologies and practices that can usher in a healthier future.”
— Susan E. Dudley, Director, The George Washington University Regulatory Studies Center, Distinguished Professor of Practice, Trachtenberg School of Public Policy & Public Administration