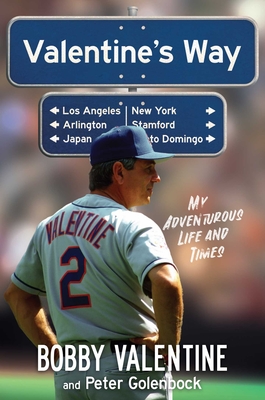 
Not On Our Shelves—Ships in 1-5 Days
A frank and often hilarious account of the baseball life from one of the game’s great iconoclasts.

“…the most entertaining baseball book of the year!” —Baseball Almanac

From his first year in Rookie ball, when Tommy Lasorda ordered him to send a letter to the Dodgers’ starting shortstop informing him that he should retire early to make way for the young phenom, to appearing in disguise in the Mets’ dugout following an ejection, Bobby Valentine was a lightning rod for mischievous controversy, grabbing headlines wherever he went. Mavericks are seldom welcomed to upset the status quo, and Major League Baseball was no exception.

In astonishing detail, Bobby Valentine reflects on the many remarkable moments that comprised his playing and managerial careers. From his wild times as a player in the early seventies, to his transition to coaching with the Mets after a catastrophic injury derailed his playing days; from managing the Texas Rangers in 1985, where he employed sabermetrics and witnessed the beginning of the steroid era, to his iconic stretch at Shea Stadium, when he led the Mets to the 2000 World Series while battling a dysfunctional front office and ownership; from his beloved time in Japan managing the Chiba Lotte Marines, who won the Japan Series, to the absolute disaster of a season in Boston, where he was greeted by a toxic clubhouse and fractured organization. Readers will be intrigued by his off-the-field exploits as well, from his early years as an international ballroom dancing champion to his post-playing days where he may have invented the wrap sandwich and the modern sports bar. Valentine has consistently overcome adversity and reinvented himself, regardless of the playing field. Along the way, he shares stories and insights on memorable moments and iconic personalities, including Nolan Ryan, Ichiro Suzuki, Gary Carter, Mike Piazza, Tom Seaver, Joe Torre, George Steinbrenner, Dustin Pedroia, and David Ortiz.

Valentine’s Way is a riveting look back on forty years of baseball, written with a novelist’s mind and a journalist’s memory, and in collaboration with legendary baseball author Peter Golenbock. A once-in-a-generation book that leaves no great story untold, this is an invaluable document for anyone wondering what it’s really like to play and work in the rarified world of Major League Baseball.
Bobby Valentine was the fifth player chosen in the 1968 draft by the Los Angeles Dodgers, but his major league playing career was cut short by a broken leg several years later. He began his managerial career in 1985 with the Texas Rangers, before going on to manage the Chiba Lotte Marines; the New York Mets, whom he took to the 2000 World Series; and the Boston Red Sox. A second stint with the Marines resulted in the team winning the Japan Series and Asia Series in 2005. In 2002, he was awarded the Branch Rickey Award for his donations to and personal work with survivors of the 9/11 attacks. In 2018, the Emperor of Japan bestowed upon him the Order of the Rising Sun. He has also worked as an analyst for ESPN. Currently, he is the executive director of athletics at Sacred Heart University, the proprietor of the Bobby Valentine Sports Academy, and an owner of Makuhari Media, a company that produces sports documentaries. He was raised and resides in Stamford, Connecticut where he was named Citizen of the Year in 2011.

Peter Golenbock, who also grew up in Stamford, is one of the nation’s best-known sports authors. He has written ten New York Times bestsellers, including The Bronx Zoo (with Sparky Lyle), Number 1 (with Billy Martin), Balls (with Graig Nettles), George: The Poor Little Rich Man Who Built the Yankee Empire, and House of Nails (with Lenny Dykstra). He lives in St. Petersburg, Florida.
“Label the memoir of longtime MLB player and manager Bobby Valentine a home run, grand slam, game winner... but this book is the best read to come across my desk in a decade.  ...Valentine's Way delivers an endless amount of insider material sports fans crave.”
— Don Laible, WIBX