Crisis of Command: How We Lost Trust and Confidence in America's Generals and Politicians (Hardcover) 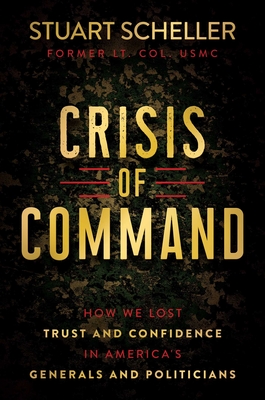 Crisis of Command: How We Lost Trust and Confidence in America's Generals and Politicians (Hardcover)

As Seen on Tucker Carlson

Combat-decorated Marine officer Stuart Scheller speaks out against the debacle of the Afghan pullout as the culmination of a decades-long and still-ongoing betrayal of military members by top leadership, from generals to the commander in chief, comes to light.

Lieutenant Colonel Stuart Scheller was the perfect Marine. Battle tested. A leader. Decorated for valor. Yet when the United States acted like the Keystone Cops in a panicked haphazard exit from Afghanistan for political reasons, Scheller spoke out, and the generals lashed out. In fact, they jailed him to keep him quiet, claiming he lost the “trust and confidence” bestowed upon him by the Marines. When the faith and trust is exactly what our generals and even our commander-in-chief betrayed by exercising such reckless and derelict policies. Now Scheller is free from the shackles of the Marine Corps and can speak his mind. And in Crisis of Command, that he does. He holds our generals’ feet to the fire. The same generals who play frivolously with the lives of our service men and women for political gain. The same general who lied to political leaders to further their own agendas and careers. Stuart Scheller is here to say that the buck stops here. Accountability starts now. It’s time to demand accountability and stand up for our military. In this book, Stuart Scheller shows us how.
LtCol Stuart Scheller joined the United States Marine Corps in 2005. He holds a Bachelor’s degree from the University of Cincinnati and a Master’s in Military Science from the Marine Corps Command and Staff College. Over the course of his seventeen-year service, he has commanded troops at the platoon, company, and battalion level.  He has excelled as a leader both on deployment and in the training of future warriors. In the first year of his service he was called upon to help evacuate American citizens from Beirut during the 2006 Israeli-Lebanese conflict. In Ramadi, Iraq, he served as a company executive officer and fire support team leader. In the Paktika and Ghanziprovinces of Afghanistan, he helped clear IEDs. He has held multiple training commands including, most recently, commander of the Advanced Infantry Training Battalionat the School of Infantry East at Camp Lejeune, North Carolina. It was in this capacity that he attracted attention in the summer of 2021 for speaking out against the disordered American withdrawal from Afghanistan and the failures in leadership––civil and military––that led to the chaos.
“We are in a crisis of leadership at the senior levels in the military. Senior military leaders have failed over the last two decades. The book Crisis of Command addresses the shortfalls perfectly. We need more people like Stuart Scheller with the courage to challenge the system. The future of America depends upon it.”
— General Don Bolduc, USA

“Crisis of Command is raw, real, and courageous, just like Stuart Scheller. Stuart is a man on a mission, and the country needs him now more than ever. He is an intelligent, educated, combat tested, and command selected superior warfighter. Now he’s calling out our so-called ‘leaders’ who have failed the mission, troops, and nation.”
— Major Pete Hegseth, USA, Fox and Friends Anchor

“If your reaction to the botched American withdrawal from Afghanistan was, ‘what the f@#%,’ this book is a MUST read. Marine LtCol Scheller, jailed for demanding accountability, offers hard truths to the Pentagon’s top brass. If the military wants to prevent the next failure, they should start listening to leaders like LtCol Scheller.”
— Congressman Brian Mast, USMC

“Unpopular views are always hard to hear until they prove to be true. What Stuart Scheller has to say is critical for the military and nation.”
— LtCol Oliver North, USMC