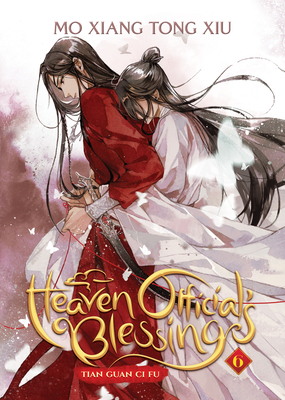 The blockbuster danmei/Boys’ Love novels from China that inspired the animated series! This epic historical fantasy about a prince and the mysterious man by his side is now officially in English, for the very first time!

Born the crown prince of a prosperous kingdom, Xie Lian was renowned for his beauty, strength, and purity. His years of dedication and noble deeds allowed him to ascend to godhood. But those who rise, can also fall…and fall he does, cast from the Heavens again and again and banished to the mortal realm.

Eight hundred years after his mortal life, Xie Lian has ascended to godhood for the third time. Now only a lowly scrap collector, he is dispatched to wander the earthly realm to take on tasks appointed by the heavens to pay back debts and maintain his divinity. Aided by old friends and foes alike, and graced with the company of a mysterious young man with whom he feels an instant connection, Xie Lian must confront the horrors of his past in order to dispel the curse of his present.

The Seven Seas English-language edition will include covers from 日出的小太陽 (tai3_3), and exclusive, all-new interior illustrations from ZeldaCW.
Mo Xiang Tong Xiu (MXTX) is a globally renowned and New York Times’ bestselling author whose works are often cited as the most well-known of the modern danmei genre. Originally self-published in Chinese via the novel serialization website, JJWXC, her current titles include The Scum Villain’s Self-Saving System, Grandmaster of Demonic Cultivation, and Heaven Official’s Blessing, all available in English from Seven Seas. Her series have enormously popular multimedia adaptations and have been published in numerous languages around the world.