The Case of the Married Woman: Caroline Norton and Her Fight for Women's Justice (Hardcover) 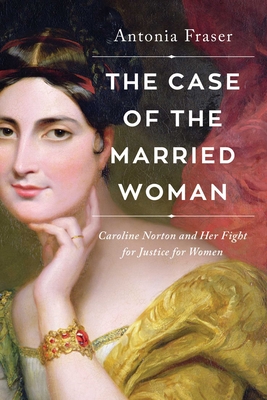 The Case of the Married Woman: Caroline Norton and Her Fight for Women's Justice (Hardcover)


On Our Shelves Now at:
Award-winning historian Antonia Fraser brilliantly portrays a courageous and compassionate woman who refused to be curbed by the personal and political constraints of her time.

Caroline Norton dazzled nineteenth-century society with her vivacity, her intelligence, her poetry, and in her role as an artist's muse. After her marriage in 1828 to the MP George Norton, she continued to attract friends and admirers to her salon in Westminster, which included the young Disraeli. Most prominent among her admirers was the widowed Prime Minister, Lord Melbourne.

Racked with jealousy, George Norton took the Prime Minister to court, suing him for damages on account of his 'Criminal Conversation' (adultery) with Caroline. A dramatic trial followed. Despite the unexpected and sensational result—acquittal—Norton was still able to legally deny Caroline access to her three children, all under seven. He also claimed her income as an author for himself, since the copyrights of a married woman belonged to her husband.

Yet Caroline refused to despair. Beset by the personal cruelties perpetrated by her husband and a society whose rules were set against her, she chose to fight, not surrender. She channeled her energies in an area of much-needed reform: the rights of a married woman and specifically those of a mother. Over the next few years she campaigned tirelessly, achieving her first landmark victory with the Infant Custody Act of 1839. Provisions which are now taken for granted, such as the right of a mother to have access to her own children, owe much to Caroline, who was determined to secure justice for women at all levels of society from the privileged to the dispossessed.
Antonia Fraser is the author of many widely acclaimed historical works which have been international bestsellers. She was awarded the Medlicott Medal by the Historical Association in 2000 and was made a DBE in 2011 for services to literature. Her previous books include Mary Queen of Scots; King Charles II; The Weaker Vessel: Woman's Lot in Seventeenth-Century England, which won the Wolfson History Prize; Marie Antoinette: The Journey; Perilous Question; The King and the Catholics; and The Wives of Henry VIII.  Must You Go?, a memoir of her life with Harold Pinter, was published in 2010, and My History: A Memoir of Growing Up  in 2015. Fraser's The Case of the Married Woman is available from Pegasus Books. She lives in London.
"The prolific Lady Antonia Fraser has long been drawn to formidable — and tragic — women, starting with her first biography, of Mary Stuart, more than half a century ago.Fraser’s skill and passion override all, and in The Case of the Married Woman, she renders her subject a woman of dignity, depth and character. Here we meet a heroine, one who fought for herself, for her children, and for all women and children. As Caroline Norton herself put it, 'I do not ask for my rights. I have no rights; I have only wrongs.'"
— The New York Times Book Review

"Esteemed historian Fraser, who has written biographies of prominent women, such as Mary, Queen of Scots, and Marie Antoinette, turns her eye to the lesser-known yet impactful Caroline Norton, whose very public divorce turned her into a crusader for women's rights in nineteenth-century England. Enlightening and inspiring."
— Booklist, starred review

"A historical delight, The Case of the Married Woman is the biography of a tenacious woman who refused to accept injustice, indifference, and anonymity."
— Foreword (starred)

“Antonia Fraser's tale of double standards is a delight. Combining high society campery and historical scholarship in ways rivalling Nancy Mitford, Antonia Fraser is a great chronicler. The major theme of Fraser's book is rage—hers and Caroline’s—that women in those days had no rights over their children. This is a rousing book. Classic Antonia Fraser.”
— The Sunday Telegraph

"Fraser's is a spirited book, particularly moving on Norton's old age. It is impressive to see one of our most important intellectual figures turning her mind to this remarkable woman from an earlier, different and not so different era.”
— The Guardian

“Fraser’s book is the first to emphasize what a modern figure Norton is, portraying her not as a hapless victim but as a working mother and bestselling writer who refused to submit to what can only be called the patriarchy. Fraser is surely right to call her a nineteenth-century heroine.”
— The Sunday Times

“A fascinating story, and Fraser's account is compulsively readable.  A fitting tribute to a captivating, campaigning heroine.”
— The Evening Standard

“Caroline Norton’s life and writings are vividly realized in Fraser's new analysis of the woman and her words.  The woman who leaps from the page is vastly complex.  Fraser's illuminating book shows how the story of Caroline Norton still has so much to say about the rights women lack and the abuses they suffer, even today.”
— BBC History Magazine