China After Mao: The Rise of a Superpower (Hardcover) 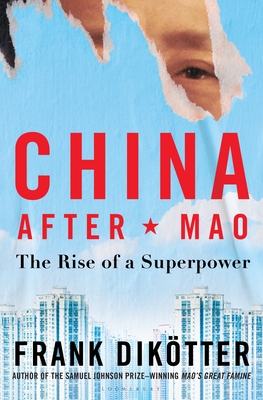 China After Mao: The Rise of a Superpower (Hardcover)

“A blow-by-blow account … An important corrective to the conventional view of China's rise.”--Financial Times
From internationally renowned historian Frank Dikötter, winner of the Samuel Johnson Prize, a myth­shattering history of China from the death of Chairman Mao to Xi Jinping.

Through decades of direct experience of the People's Republic combined with extraordinary access to hundreds of hitherto unseen documents in communist party archives, the author of The People's Trilogy offers a riveting account of China's rise from the disaster of the Cultural Revolution. He takes us inside the country's unprecedented four-decade economic transformation--from rural villages to industrial metropoles and elite party conclaves--that vaulted the nation from 126t ­largest economy in the world to second ­largest. A historian at the pinnacle of his field, Dikötter challenges much of what we think we know about how this happened. Casting aside the image of a society marching unwaveringly toward growth, in lockstep to the beat of the party drum, he recounts instead a fascinating tale of contradictions, illusions, and palace intrigue, of disasters narrowly averted, shadow banking, anti-corruption purges, and extreme state wealth existing alongside everyday poverty. He examines China's navigation of the 2008 financial crash, its increasing hostility towards perceived Western interference, and its development into a thoroughly entrenched dictatorship with a sprawling security apparatus and the most sophisticated surveillance system in the world. As this magisterial book makes clear, the communist party's goal was never to join the democratic world, but to resist it--and ultimately defeat it.

Frank Dikötter is Chair Professor of Humanities at the University of Hong Kong and Senior Fellow at the Hoover Institution. His books have changed the way historians view China, from the classic The Discourse of Race in Modern China to his award-winning People's Trilogy documenting the lives of ordinary people under Mao. He lives in Hong Kong.

“A blow-by-blow account … An important corrective to the conventional view of China's rise.” —Financial Times

“One of the most insightful and nuanced looks at the complex rise of China since the Second World War ... engrossing and riveting.” —The Diplomatic Courier

“A skilled writer, Dikotter is accessible to both expert and lay readers alike.” —The Washington Examiner

“A compelling and informative account and analysis of Chinese history from the early 1970s to 2022 ... China After Mao is packed with intrigue and insight for the layperson and scholar alike” —Shelf Awareness

“Dikötter (The People's Trilogy) debunks the myth of China's miracle economy in this expert study ...Extensively researched and cogently argued, this is a must-read for China watchers.” —Publishers Weekly

“Whether he is pondering which came first, Party politics or economic policy, or navigating the slippery relationship between power, productivity and protest, Dikötter unpicks this most tangled web with admirable clarity.” —South China Morning News