The Crime Without a Name: Ethnocide and the Erasure of Culture in America (Hardcover) 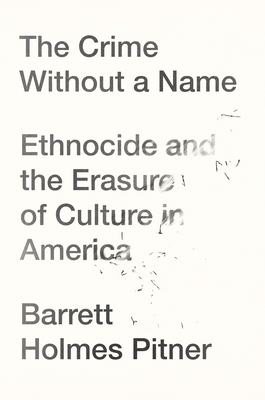 The Crime Without a Name: Ethnocide and the Erasure of Culture in America (Hardcover)


Not On Our Shelves—Ships in 1-5 Days
In this incisive blend of personal narrative and philosophical inquiry, journalist and activist Barrett Holmes Pitner seeks a new way to talk about racism in America.

Can new language reshape our understanding of the past and expand the possibilities of the future? The Crime Without a Name follows Pitner’s journey to identify and remedy the linguistic void in how we discuss race and culture in the United States. Ethnocide, first coined in 1944 by Jewish exile Raphael Lemkin (who also coined the term "genocide"), describes the systemic erasure of a people’s ancestral culture. For Black Americans, who have endured this atrocity for generations, this erasure dates back to the transatlantic slave trade and reached new resonance in a post-Trump world.

Just as the concept of genocide radically reshaped our perception of human rights in the twentieth century, reframing discussions about race and culture in terms of ethnocide can change the way we understand our diverse and rapidly evolving racial and political climate in a time of increased visibility around police brutality and systemic racism. The Crime Without a Name traces the historical origins of ethnocide in the United States, examines the personal, lived consequences of existing within an ongoing erasure, and offers ways for readers to combat and overcome our country’s ethnocidal foundation.
Barrett Holmes Pitner is a columnist, journalist, and philosopher whose work has been published in The Daily Beast, BBC, The Guardian, and elsewhere. He is the founder of The Sustainable Culture Lab, a cultural think tank with the goals of influencing policy by working with legislators and decision makers, and impacting culture at a grassroots level through events, work, and cultural offerings. He lives in Washington, D.C.
An NPR Best Book of the Year

"This heavily researched book shimmers with creativity and intelligence, expertly balancing realism, optimism, and honesty . . . [A] well-argued, deeply felt treatise on the links among language, racism, and redemption." —Kirkus Reviews

"Journalist and philosopher Pitner debuts with an erudite . . . look at how systemic racism imperils Black and Indigenous cultures in the U.S. . . . Mixing philosophy, politics, and memoir, Pitner discusses Marxist and Hegelian dialectics, the 'ethnocidal terror' faced by his Gullah Geechee ancestors in South Carolina, and the links between modern-day gun culture in the U.S. and the legacy of slavery . . . [An] incisive examination of the forces of inequality." —Publishers Weekly

"As a work of philosophy, clear-eyed journalism, and a deft understanding of history, The Crime Without A Name provides us with a nuanced paradigm to better understand the United States, to live up to values we so love to espouse, and to wrestle with the hereditary sin of systemic racism. This journey into existentialism as humanity is empathetic, exact, and gorgeous. I love this book." —RJ Young, author of Let it Bang: A Young Black Man’s Reluctant Odyssey into Guns