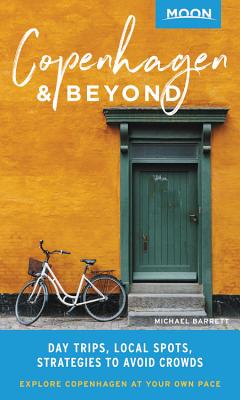 
Not On Our Shelves—Ships in 1-5 Days
Whether you're sipping coffee by a canal, exploring lavish palaces, or discovering the real meaning of hygge, get to know the Danish capital with Moon Copenhagen & Beyond.Day trip itineraries, favorite local spots, and strategies to skip the crowds: Take your time with Moon Copenhagen & Beyond.
Want to experience more of Scandinavia? Try Moon Norway. Exploring more of Europe? Check out Moon Rome, Florence & Venice or Moon Barcelona & Madrid.
Michael Barrett grew up in Sudbury, a market town in rural southeast England, though his roots are in working-class London. He uprooted to Denmark in the mid-2000s, initially to second city Aarhus, where he studied journalism and the Middle East before later relocating to Copenhagen. The move to Denmark came about through serendipity, but the influence of the Scandinavian country is now as much a part of Michael's character as his London accent - which sounds a bit odd in Danish - and his affection for Suffolk cider. He wrote sports articles for his student newspaper in the United Kingdom, but his first real journalism gig was in Lebanon in 2012, where he contributed as a freelance staff writer with the Beirut franchise of Time Out Magazine. Back in Denmark, Michael began reporting in 2015 with The Local Denmark, an English-language news media aimed at international residents and others interested in Danish goings-on. He went on to become editor for both The Local Denmark and its sister site The Local Norway. Michael is a fully-fledged rye bread aficionado, provided there is no remoulade or curry dressing involved; and he has been known to grumble for entire mornings over the cold Danish winters. He has not once complained about the glorious light, late summer evenings.