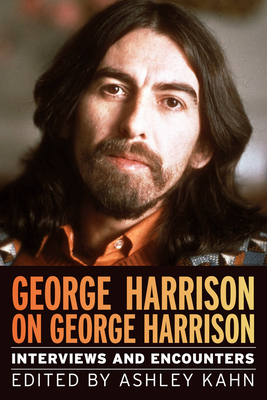 George Harrison on George Harrison is an authoritative, chronologically arranged anthology of Harrison’s most revealing and illuminating interviews, personal correspondence, and writings, spanning the years 1962 to 2001.

This compendium of his words and ideas proves that point repeatedly, revealing his passion for music, his focus on spirituality, and his responsibility as a celebrity, as well as a sense of deep commitment and humor.

Though known as the “Quiet Beatle,” Harrison was arguably the most thoughtful and certainly the most outspoken of the famous four.
Grammy-winning author Ashley Kahn has received widespread critical acclaim for A Love Supreme: The Making of John Coltrane’s Signature Album and Kind of Blue: The Making of the Miles Davis Masterpiece. His other books include The House That Trane Built and, as cowriter, The Universal Tone, Carlos Santana’s autobiography. He teaches at New York University, and his articles have appeared in the New York Times, Rolling Stone, and other publications.
“Despite all the pressures of fame, George Harrison managed to stay grounded, and real, and to live a life in full. In George Harrison on George Harrison, Ashley Kahn has summoned up a portrait of the artist as public figure, as friend, as husband, as spiritual devotee, through a kaleidoscopic assemblage of letters, interviews, broadcast transcripts, and more. Harri-son was thoughtful, sensitive, honest, warmly funny, kind, and very, very smart. It all shines through in this beautiful collection.”  —Tom Piazza, Author of Why New Orleans Matters

“No one does a better job than Ashley Kahn at bringing us behind the scenes into the inner workings of the music world. He’s done it again with this mind-expanding book on George Harrison and the Beatles.” —Ted Gioia, Author of Music: A Subversive History

“The quiet Beatle—Janis Joplin’s favorite Beatle, by the way—finally gets his say in this superb collection of Harrison’s letters, interviews, and writings. Ashley Kahn, super-sleuth, has unearthed some real gems. Experiencing the evolution of this amazing musician and human  being through his own words makes for an astounding journey.” —Holly George-Warren, Author of Janis: Her Life And Music

“Harrison’s humanity, thoughtfulness, and humor are on rich display throughout.” —Library Journal

“[O]ver 500 pages of wit and wisdom from the supposed ‘quiet Beatle.’” —Goldmine Magazine