Have a Little Faith: The John Hiatt Story (Hardcover) 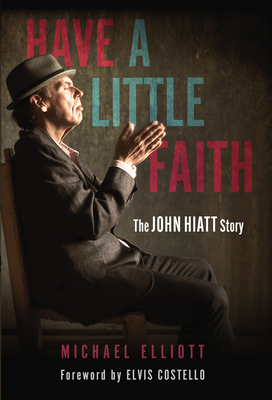 Have a Little Faith: The John Hiatt Story (Hardcover)


Not On Our Shelves—Ships in 1-5 Days
"Have a Little Faith is not merely a fan’s notes; this is a riveting book that tells the stories of one of our greatest roots musicians and the tenacity that’s grown out of his enduring passion for music." — No Depression

A journey through an artist's quest for success, deep dive into substance abuse, family tragedy, and ultimate triumph

By the mid-1980s, singer-songwriter John Hiatt had been dropped from three record labels, burned through two marriages, and had fallen deep into substance abuse.

It took a stint in rehab and a new marriage to inspire him, then a producer and an A&R man to have a little faith. By February 1987, he was back in the studio on a shoestring budget with a hand-picked supergroup consisting of Ry Cooder on guitar, Nick Lowe on bass, and Jim Keltner on drums, recording what would become his masterpiece, Bring the Family.

Based on author Michael Elliott's multiple extensive and deeply personal interviews with Hiatt as well as his collaborators and contemporaries, including Rosanne Cash, Bonnie Raitt, Ry Cooder, and many others, Have a Little Faithis the journey through the musical landscape of the 1960s through today that places Hiatt’s long career in context with the glossy pop, college-alternative, mainstream country, and heartland rock of the last half-century.

Hiatt’s life both pre- and post-Family will be revealed, as well as the music loved by critics, fellow musicians, and fans alike.
Michael Elliott is a contributor to the pioneering roots music authority No Depression. His writing has also appeared in PopMatters, Albmism, Americana UK, and The Bitter Southerner. Elliott spent close to thirty years in radio broadcasting and management in a variety of formats. He has interviewed and produced profiles on musicians as diverse as Isaac Hayes, Charlie Daniels, Delbert McClinton, Johnny Rivers, and Little Richard. He lives in Raleigh, NC. Elvis Costello has been a songwriter for fifty years, collaborating with Paul McCartney, Burt Bacharach, Allen Toussaint, and The Roots. He is a two-time Grammy-winning recording artist and a member of both the Songwriters Hall of Fame and the Rock and Roll Hall of Fame.
"One of the things that any admirer of John Hiatt will appreciate about this book is the lack of self-pity, bitterness or reproach when John reflects on the unwise paths taken and even the occasional gamble with sanity. I certainly recognize how we all made regrettable as well as necessary mistakes. Sometimes the heart or mind broken might even be your own but time brings clarity, strength of will has sustained sobriety and I sense and hope John now knows both love and happiness." —Elvis Costello, from his foreword

"John is an American treasure, as original and brilliant a writer as he is funky and expressive a singer. With his rapier wit and keen insight set to his own blend of indelible roots rock/soul/country, he helped create what we've come to call Americana. His story spans so much of our shared personal and cultural history—I loved getting a glimpse into some of how he's come to be. Releasing his 'Thing Called Love' as the first single from my album Nick of Time changed my life forever. I'll always be among his biggest fans." —Bonnie Raitt


"John Hiatt gets the bio he deserves and one that matches his music: concise but in-depth, soulful and full of meaning. Have a Little Faith is a great book." —Alan Paul, author of Texas Flood: The Inside Story of Stevie Ray Vaughan and One Way Out: The Inside History of the Allman Brothers Band

“Michael Elliott paints a vibrant picture of John Hiatt’s journey: from a troubled childhood in Indiana to fledgling songwriter in Nashville to numerous twists and turns in the recording industry—and personal ups and downs—emerging as one of our most beloved and enduring singer-songwriters. Hiatt’s peers like Bonnie Raitt and Rosanne Cash add insight, along with numerous others Elliott has tracked down for this in-depth music biography.” —Holly George-Warren, author of Janis: Her Life and Music

"You already know John Hiatt is one of our best songwriters, but what you might not know is his life is as great a story as his songs—a tale with so many ups and downs from triumph to tragedy and back again, it only makes you love him that much more. He’s had a remarkable career and here, finally, is the book of stories behind the master’s songs. Compellingly rendered by my fellow North Carolinian Michael Elliott, it’s the book you should be reading while listening to Hiatt’s 'Bring the Family.' I thought I knew my John Hiatt, but I learned a lot." —David Menconi, 2019 North Carolina Piedmont Laureate, author of Step It Up and Go: The Story of North Carolina Popular Music, from Blind Boy Fuller and Doc Watson to Nina Simone and Superchunk


"With Have A Little Faith, Michael Elliott has brought to the page a detailed portrait of the charismatic young artist I first observed pulling a load of clothes out of a coin operated dryer—the wit, passion, intelligence, vulnerability, ambition, songwriting mastery and performance prowess, as well as the time-tested human being we all know and love today. The book confirms my belief that for truth-tellers like John Hiatt, the circuitous route to a fulfilled destiny demands a faith in oneself that sometimes wavers but, in his case, has never failed." —Rodney Crowell, Grammy Award–winning singer-songwriter, producer, and musician


"Readers will be left feeling like they’ve just listened to Hiatt’s music or attended one of his concerts--appreciative of the time spent with an American treasure, and eager for more." —Library Journal

"Have a Little Faith is not merely a fan’s notes; this is a riveting book that tells the stories of one of our greatest roots musicians and the tenacity that’s grown out of his enduring passion for music." — No Depression

"Have A Little Faith is a compelling look at a remarkably compelling character." — Glide Magazine

"In Have A Little Faith: The John Hiatt Story, Michael Elliot has done an excellent job capturing the obvious aspects of who John is but also the elusive essence that’s nestled in the nooks and crannies of his life and, most importantly, his music." —Matt Wallace, producer, Faith No More, The Replacements, Maroon 5, Train, John Hiatt