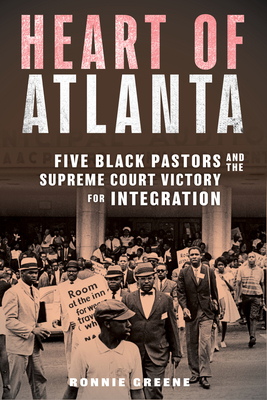 
In Stock—Click for Locations
The Heart of Atlanta Supreme Court decision stands among the court’s most significant civil rights rulings.

In Atlanta, Georgia, two arch segregationists vowed to flout the Civil Rights Act of 1964, the sweeping slate of civil rights reforms just signed into law by President Lyndon B. Johnson. The Pickrick restaurant was run by Lester Maddox, soon to be governor of Georgia. The other, the Heart of Atlanta motel, was operated by lawyer Moreton Rolleston Jr.

After the law was signed, a group of ministry students showed up for a plate of skillet-fried chicken at Maddox’s diner. At the Heart of Atlanta, the ministers reserved rooms and walked to the front desk.

Lester Maddox greeted them with a pistol, axe handles, and a mob of White supporters. Moreton Rolleston refused to accept the Black patrons. These confrontations became the centerpiece of the nation's first two legal challenges to the Civil Rights Act.

In gripping detail built from exclusive interviews and original documents, Heart of Atlanta reveals the saga of the case’s rise to the US Supreme Court, which unanimously rejected the segregationists.

Heart of Atlanta restores the legal cases and their heroes to their proper place in history.

Ronnie Greene is a veteran investigative reporter, who, over the years, has worked at the Center for Public Integrity, the Associated Press, and the Miami Herald. He is currently in the DC bureau of Reuters as Washington enterprise editor. He is the author of Shots on the Bridge, a narrative of the police shootings of unarmed innocents on the Danziger Bridge in New Orleans during Hurricane Katrina; and Night Fire, an exposé of Shell Oil's toxic waste pollution of the African American district of Norco, LA, a company town. He lives near Washington, DC.
"Greene…evocatively takes readers back to this heated era and the case Heart of Atlanta Inc. v. United States, which ended segregation in public accommodations."—Johns Hopkins Magazine

"Greene braids together detail built from exclusive interviews and original documents to chronicle the case’s rise to the U.S. Supreme Court after two segregationists set out to flout the Civil Rights Act of 1964.” —Atlanta Magazine

"Greene … evocatively takes readers back to this heated era and the case Heart of Atlanta Inc. v. the United States, which ended segregation in public accommodations.” —Johns Hopkins Magazine