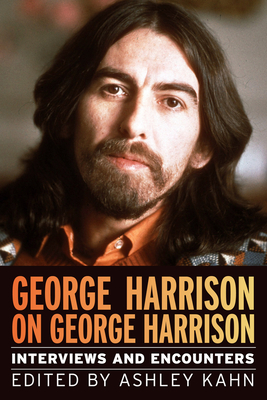 George Harrison on George Harrison is an authoritative, chronologically arranged anthology of Harrison’s most revealing and illuminating interviews, personal correspondence, and writings, spanning the years 1962 to 2001.

This compendium of his words and ideas proves that point repeatedly, revealing his passion for music, his focus on spirituality, and his responsibility as a celebrity, as well as a sense of deep commitment and humor.

Though known as the “Quiet Beatle,” Harrison was arguably the most thoughtful and certainly the most outspoken of the famous four.
Grammy-winning author Ashley Kahn has received widespread critical acclaim for A Love Supreme: The Making of John Coltrane's Signature Album and Kind of Blue: The Making of the Miles Davis Masterpiece. His other books include The House That Trane Built and, as cowriter, The Universal Tone, Carlos Santana's autobiography. He teaches at New York University, and his articles have appeared in the New York Times, Rolling Stone, and other publications.
"Through the centuries, the word elegy has been applied to many genres, including public proclamations of grief, stately English poems, and writings about pain and loss. Let’s add to this list Ashley Kahn’s George Harrison on George Harrison." -- Sibbie O'Sullivan, Washington Post

"Nuggets and tidbits are manna to hardcore Beatles fans, and each interview is buoyed by not only editor Ashley Kahn’s astute intros, but sometimes reflections by the interviewers themselves." —Bob Ruggiero, Houston Press

"The wealth of material in George Harrison on George Harrison makes it possible to track the life and career of this worthy subject, making the text a valuable addition to rock history." —Jeff Fleischer, The Foreword