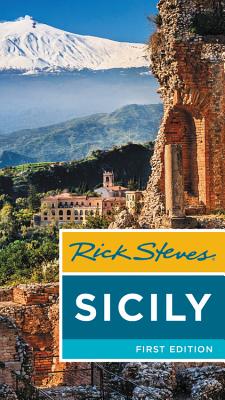 
In Stock—Click for Locations
Swim in the sparkling Mediterranean, marvel at the peak of Mount Etna, and get to know this region's timeless charm: with Rick Steves on your side, Sicily can be yours!
Inside Rick Steves Sicily you'll find:Make the most of every day and every dollar with Rick Steves Sicily.
Since 1973, Rick Steves has spent about four months a year exploring Europe. His mission: to empower Americans to have European trips that are fun, affordable, and culturally broadening. Rick produces a best-selling guidebook series, a public television series, and a public radio show, and organizes small-group tours that take over 30,000 travelers to Europe annually. He does all of this with the help of more than 100 well-traveled staff members at Rick Steves' Europe in Edmonds, WA (near Seattle). When not on the road, Rick is active in his church and with advocacy groups focused on economic and social justice, drug policy reform, and ending hunger. To recharge, Rick plays piano, relaxes at his family cabin in the Cascade Mountains, and spends time with his son Andy and daughter Jackie. Find out more about Rick at www.ricksteves.com and on Facebook.
Connect with Rick:facebook.com/RickStevestwitter: @RickStevesinstagram: ricksteveseurope
Sarah Murdoch's love of travel began at age 10 with a visit to her dad's family in Ireland. She went on to study architecture in Rome and practiced architecture in Seattle for a few years, but Italy kept calling. Abandoning her drafting board, Sarah became a tour guide and guidebook researcher for Rick Steves' Europe in 2000. She discovered a fascination with Sicily on a vacation and has never looked back, spending months on the island every year and learning to drive like a Sicilian. Her blog (www.adventureswithsarah.net) chronicles her travels and her passion for the perfectly packed bag. For updates, visit www.adventuresinsicily.com.

After receiving his Ph.D., Alfio di Mauro, a native of Sicily, began his career as a professor of biochemistry with a specialty in Sicilian blood oranges and their uses. He decided to take his expertise in food and wine on the road, becoming a tour guide for Rick Steves' Europe in 2005. His passions are history, photography, his two young sons, and sharing his homeland with visitors. He lives on the slopes of Mount Etna, in Catania.