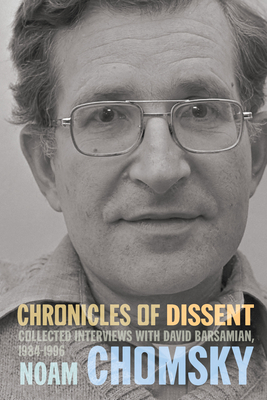 Conducted from 1984 to 1996, these interviews first appeared in the books Chronicles of Dissent, Keeping the Rabble in Line, and Class Warfare, all published by the independent publisher Common Courage Press in Monroe, Maine.

This omnibus collection includes a new introduction by David Barsamian, looking back on conversations and engagement with Chomsky's ideas that now spans decades, as well as a classic essay by Alexander Cockburn on Chomsky that served as the introduction to one of the original volumes.

Noam Chomsky is Institute Professor (emeritus) in the Department of Linguistics and Philosophy at the Massachusetts Institute of Technology and Laureate Professor of Linguistics and Agnese Nelms Haury Chair in the Program in Environment and Social Justice at the University of Arizona. His work is widely credited with having revolutionized the field of modern linguistics. Chomsky is the author of numerous best-selling political works, which have been translated into scores of languages. David Barsamian has altered the independent media landscape, both with his weekly radio program, Alternative Radio, and his books with Noam Chomsky, Eqbal Ahmad, Howard Zinn, Tariq Ali, Arundhati Roy, and Edward Said. His latest book with Noam Chomsky is Global Discontents: Conversations on the Rising Threats to Democracy. He lectures on world affairs, imperialism, capitalism, propaganda, the media, the economic crisis and global rebellions. ​​​David Barsamian is the winner of the Media Education Award, the ACLU's Upton Sinclair Award for independent journalism, and the Cultural Freedom Fellowship from the Lannan Foundation. The Institute for Alternative Journalism named him one of its Top Ten Media Heroes. He is the recipient of the Lifetime Achievement Award from the Rocky Mountain Peace and Justice Center. In 2017 the South Asian Network for Secularism and Democracy presented him with their Lifetime Achievement Award. He has collaborated with the world-renowned Kronos Quartet in events in New York, London, Vienna and elsewhere. Barsamian was deported from India due to his work on Kashmir and other revolts. He is still barred from traveling to "the world's largest democracy."