Gold in the Furnace (Paperback) 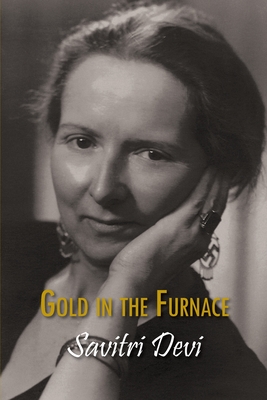 Gold in the Furnace (Paperback)

Gold in the Furnace is an ardent National Socialist's vivid account of life in occupied Germany in the aftermath of World War II, based on extensive travels and interviews conducted in 1948 and 1949.

Savitri Devi is scathing in her description of Allied brutality and hypocrisy: countless German civilians died from Allied firebombing; millions perished after the war, driven from their homes by Russians, Czechs, Poles, and others; more than a million prisoners of war perished from planned starvation or outright murder in Allied concentration camps; untold thousands more disappeared into slave labour camps from the Congo to Siberia.

Savitri Devi describes in vivid detail how individual National Socialists were subjected to "de-Nazification" by Germany's democratic liberators. Party and military leaders were subjected to summary execution, torture, starvation, show-trials, imprisonment, and execution. Ordinary party members were subjected to petty indignities and recantations extorted under the threat of imprisonment, hunger, and the denial of livelihood. She also chronicles the systematic plunder of Germany by the Allies: the clear-cutting of ancient forests, the dismantling of factories, and the theft of natural resources.

Gold in the Furnace is a valuable historical document of the National Socialists who never lost faith, despite suffering, persecution, and martyr-dom; of the ordinary Germans who revered Hitler even after the war; of the widespread rumours of Hitler's survival; of the hopes of imminent National Socialist revival, perhaps in the aftermath of a Third World War; of the expectations of Soviet victory in such a war; and of the philosophy, experi-ences, and unique personality of a remarkable woman.