Julian of Norwich: The Showings: Uncovering the Face of the Feminine in Revelations of Divine Love (Paperback) 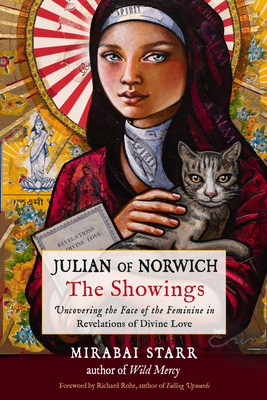 Julian of Norwich: The Showings: Uncovering the Face of the Feminine in Revelations of Divine Love (Paperback)


On Our Shelves Now at:
"As a major fan and promoter of Julian of Norwich, whom I call 'my favorite mystic', it is genuinely exciting to find such a faithful but freeing translation of Julian's long-lost Showings. Now they are no longer lost—for anyone!" —Fr. Richard Rohr, O.F.M., Center for Action and Contemplation

In this contemporary translation of one of the most beloved and influential mystical texts of all time, Julian of Norwich: The Showings brings the message and spirituality of this 14th-century mystic to 21st-century readers. Revelations of Divine Love, the first book published in English attributed to a woman, is also included.

Julian of Norwich, a contemporary of Geoffrey Chaucer, was an English anchoress in East Anglia. At the age of 30, suffering from a severe illness and believing she was on her deathbed, Julian had a series of intense visions of Jesus, which she recorded and then expanded on later in her life. In her visions, God was not angry and wrathful. Instead, the three properties of God were presented as life, love, and light, and all of His creation was good, including his servant, man. In Julian's version, man is not to blame for his sin; sin is something that he must experience and overcome in his spiritual journey with God.

Her message for today's readers is simply this: This book contains some of the most profound spiritual writing ever written and remains a perennial favorite among Christians.

This book was previously published as The Showings of Julian of Norwich. This new edition includes a foreword by Richard Rohr, author of Falling Upwards.
Mirabai Starr is an award-winning author of creative nonfiction and contemporary translations of sacred literature. She taught philosophy and world religions at the University of New Mexico–Taos for 20 years and now teaches and speaks internationally on contemplative practice and inter-spiritual dialogue. A certified bereavement counselor, Mirabai helps mourners harness the transformational power of loss.

Her latest book, Wild Mercy: Living the Fierce & Tender Wisdom of the Women Mystics, was named one of the Best Books of 2019 by Spirituality & Practice.

Mirabai is on the 2020 Watkins List of the 100 Most Spiritually Influential Living People of the World. She lives with her extended family in the mountains of northern New Mexico. Mirabaistarr.com

Julian of Norwich (c. 1342 after 1416) was the first woman writer in English and has been called "the female Chaucer." Nothing is known of her background or even her real name, simply that she believed she was a messenger to all Christians because of her 'showings' from God. She has been hailed by Thomas Merton to be “without a doubt one of the most wonderful of all Christian voices,” and former Archbishop of Canterbury Rowan Williams says that her writings “may well be the most important work of Christian reflection in the English language.”
“As a major fan and promoter of Julian of Norwich, whom I call ‘my favorite mystic,’ it is genuinely exciting to find such a faithful but freeing translation of Julian's long-lost Showings. Now they are no longer lost—for anyone!”
— Fr. Richard Rohr, OFM, Center for Action and Contemplation

"Julian of Norwich’s teachings are sorely needed to balance out the pessimism and patriarchal overload we find in today's culture and religion. Mirabai's translation is fresh and readable, helping to render Julian very alive and edgy still after all these years."
— Matthew Fox, author of Original Blessing

"In the Middle English original, Julian's expression was colloquial, vivid, and direct, shot through with lyricism and joy; Mirabai Starr has provided contemporary readers with a modern English rendering that is all of that. What a splendid gift!"
— Carol Lee Flinders, author of Enduring Grace

"Julian of Norwich's Showings shines with luminous mystical wisdom--and Mirabai Starr's lovely and engaging translation of this medieval masterpiece makes it more accessible than ever."
— Carl McColman, author of The Big Book of Christian Mysticism and Answering the Contemplative Call