When Islam is Not a Religion: Inside America's Fight for Religious Freedom (Paperback) 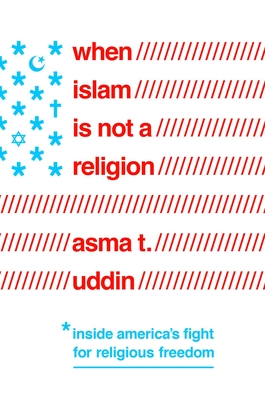 When Islam is Not a Religion: Inside America's Fight for Religious Freedom (Paperback)


In Stock—Click for Locations
A galvanizing look at constitutional freedoms in the United States through the prism of attacks on the rights of American Muslims.

Religious liberty lawyer Asma Uddin has long considered her work defending people of all faiths to be a calling more than a job. Yet even as she seeks equal protection for Evangelicals, Sikhs, Hindus, Muslims, Native Americans, Jews, and Catholics alike, she has seen an ominous increase in attempts to criminalize Islam and exclude American Muslims from their inalienable rights.

Somehow, the view that Muslims aren’t human enough for human rights or constitutional protections is moving from the fringe to the mainstream, along with the claim “Islam is not a religion.” This conceit affects all Americans because the loss of liberty for one means the loss of liberties for everyone.

When Islam Is Not a Religion also looks at how faith in America is being secularized and politicized, and the repercussions this has on debates about religious freedom and diversity.

Woven throughout this national saga is Uddin’s own story. She combines her experience as a person of Muslim faith and her legal and philosophical appreciation that all individuals have a right to religious liberty. Uddin examines the shifting tides of American culture and outlines a way forward for individuals and communities navigating today’s culture wars.
Asma T. Uddin is a religious liberty lawyer who has worked on cases at the U.S. Supreme Court, federal appellate courts, and federal trial courts. She is the founding editor-in-chief of altmuslimah.com and was an executive producer for the Emmy and Peabody-nominated docuseries, The Secret Life of Muslims. She has written for the New York Times, the Washington Post, and Teen Vogue. Asma lives in Washington, DC.
"Asma Uddin, the preeminent defender of religious freedom for American Muslims, has for years been patiently explaining why her faith is no threat to non-Muslims. When Islam Is Not a Religion is an eloquent plea for tolerance, weaving astute legal analysis with a compelling personal story. Prejudice cannot survive her testimony."
— Tom Gjelten, Religion and Belief Correspondent

"A must read—especially for conservative Christians like me—to better understand the scope and the stakes of the religious liberty debate.  I hope it starts a long-overdue conversation among believes.  It stands to be a landmark in the religious freedom discussion."
— Rod Dreher, author of the New York Times bestseller The Benedict Option

"Asma Uddin has written a terrific book. It is all at once a primer on the very American commitment to religious freedom, a history of the discrimination that Muslims in America have endured since 9/11 and a window into the life of a leading American Muslim intellectual. It is both deeply researched and a joy to read. I give it my highest recommendation."
— Eboo Patel, author of Out of Many Faiths: Religious Diversity and the American Promise

"Brilliantly paced and rigorously detailed. This book will resonate and be in demand by those seeking to understand the erosion of religious freedom in America."
— Library Journal (starred)

"The freedom to practice and cultivate one’s faith is the bedrock of America’s founding principles.  People have come to our country to escape religious persecution, but there has been a rising tide of discrimination right here at home.  Ms. Uddin is a leader for religious freedom and calls our attention to the challenges facing First Amendment rights in the post-9/11 world."
— Senator Orrin G. Hatch, former President pro tempore of the United States Senate