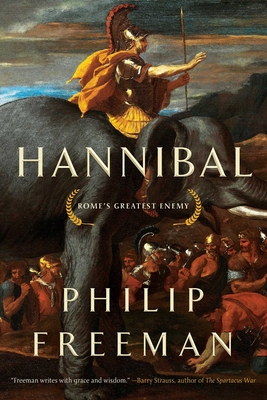 
Not On Our Shelves—Ships in 1-5 Days
Telling the story of a man who stood against the overwhelming power of the mighty Roman empire, Hannibal is the biography of a man who, against all odds, dared to change the course of history.

Over two thousand years ago one of the greatest military leaders in history almost destroyed Rome. Hannibal, a daring African general from the city of Carthage, led an army of warriors and battle elephants over the snowy Alps to invade the very heart of Rome's growing empire. But what kind of person would dare to face the most relentless imperial power of the ancient world? How could Hannibal, consistently outnumbered and always deep in enemy territory, win battle after battle until he held the very fate of Rome within his grasp?

Hannibal appeals to many as the ultimate underdog—a Carthaginian David against the Goliath of Rome—but it wasn't just his genius on the battlefield that set him apart. As a boy and then a man, his self-discipline and determination were legendary. As a military leader, like Alexander the Great before him and Julius Caesar after, he understood the hearts of men and had an uncanny ability to read the unseen weaknesses of his enemy. As a commander in war, Hannibal has few equals in history and has long been held as a model of strategic and tactical genius. But Hannibal was much more than just a great general. He was a practiced statesman, a skilled diplomat, and a man deeply devoted to his family and country.

Roman historians—on whom we rely for almost all our information on Hannibal—portray him as a cruel barbarian, but how does the story change if we look at Hannibal from the Carthaginian point of view? Can we search beneath the accounts of Roman writers who were eager to portray Hannibal as a monster and find a more human figure? Can we use the life of Hannibal to look at the Romans themselves in an unfamiliar way— not as the noble and benign defenders of civilization but as ruthless conquerors motivated by greed and conquest?
Philip Freeman earned his Ph.D. at Harvard University and has taught at Boston University, Washington University, and Luther College. He currently holds the Fletcher Jones Chair in Humanities at Pepperdine University in Malibu, California. He has been a visiting fellow at the American Academy in Rome, the Center for Hellenic Studies in Washington D.C., and the Institute for Advanced Study in Princeton. He has published over twenty books, ranging from biographies of Alexander the Great, Julius Caesar, and Saint Patrick to translations of Cicero and Aristotle. His books have been translated into fifteen languages around the world. Philip lives in Malibu, California.
"Freeman writes beautifully and with picturesque vision when chronicling Hannibal’s most famous feat."
— Merion West

"Freeman gives his readers much to consider in learning about a totally alien world in an easy, uncomplicated lively prose about an epic tale."
— New York Journal of Books

“A thorough account of the career of one of the ancient world’s most indelible and complex figures. Freeman vividly, almost cinematically, brings to life the career of Hannibal Barca, the great but ill-fated Carthaginian general whose tactical and strategic brilliance is still studied today. A simultaneously propulsive and nuanced account that hums on the page.”
— Kirkus, Starred Review

"Roman historians have cast Hannibal Barca as a cruel, uncouth barbarian, but Philip Freeman’s panoramic biography Hannibal supplies evidence that the great Carthaginian military leader was an educated statesman and diplomat, notable for his devotion to his country, family, and troops. Hannibal is an epic biography of the military genius who nearly ended Rome’s imperial expansion."
— Foreword Reviews

“Freeman offers a highly readable, well-organized military and personal biography of the Carthaginian general who nearly changed history, vividly revealing more amazing scenarios in Hannibal’s life and battles than any writer could concoct in a novel. Freeman ends with fascinating speculation on how the modern world would look if Hannibal had won. [A] vivid, fast-moving account.”
— Booklist

Praise for Philip Freeman’s Julius Caesar and Alexander the Great:

“Freeman’s cultural and historical knowledge bring the emperor to life and humanize him in a way no writer before him has succeeded in doing.”
— Publishers Weekly

“Here, in vivid and exciting detail, are all the familiar highlights of Alexander’s career: the battles, the tempestuous relationships, the dazzling ambitions, the mysterious death in Babylon. Mr. Freeman’s ambition, he tells us in his introduction, was ‘to write a biography of Alexander that is first and foremost a story.’ It is one he splendidly fulfills.”
— The Wall Street Journal

"The greatest victory of the book, however, is Freeman’s storytelling. This biography stands out from others written about Alexander thanks to its smooth flow and interesting narrative. It is, as Freeman hopes, a history book for those readers who are not already experts on Alexander or his world.”
— The Saturday Evening Post