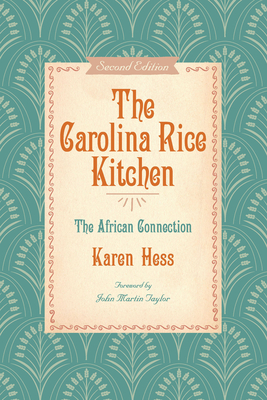 Where did rice originate? How did the name Hoppin' John evolve? Why was the famous rice called Carolina Gold?

The rice kitchen of early Carolina was the result of a myriad of influences--Persian, Arab, French, English, African--but it was primarily the creation of enslaved African American cooks. And it evolved around the use of Carolina Gold. Although rice had not previously been a staple of the European plantation owners, it began to appear on the table every day. Rice became revered and was eaten at virtually every meal and in dishes that were part of every course: soups, entr es, side dishes, dessert, and breads. The ancient way of cooking rice, developed in India and Africa, became the Carolina way. Carolina Gold rice was so esteemed that its very name became a generic term in much of the world for the finest long-grain rice available.

This engaging book is packed with fascinating historical details, including more than three hundred recipes and a facsimile of the Carolina Rice Cook Book from 1901. A new foreword by John Martin Taylor underscores Hess's legacy as a culinary historian and the successful revival of Carolina Gold rice.

Karen Hess (1918-2007) was an accomplished culinary historian and author and editor of numerous books. She was once called the best American cook in Paris by Newsweek.