To North Vietnam and Back Again: A Personal Account of Navy A-6 Intruder Operations in Vietnam (Paperback) 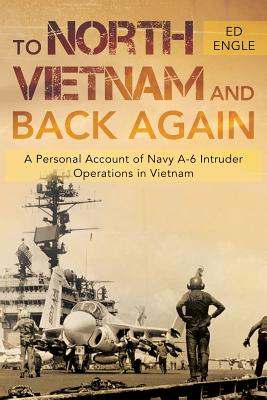 To North Vietnam and Back Again: A Personal Account of Navy A-6 Intruder Operations in Vietnam (Paperback)

This is an autobiography of Edward C. Engle. It tells the story of his childhood and education and eventual migration to the Navy as a bombardier/navigator in the A-6 Intruder aircraft. He explains the systems, the tactics, and the ordnance used against an implacable enemy over Laos, South Vietnam, North Vietnam, and Cambodia. After he returned, the book continues with his life in further assignments, eventual career change to Aeronautical Engineering Duty Officer, his participation in the Cold War and European Theater operations as part of the National Space Program, and the closing assignments of his career working on developing the requirements for the Navy's Force Network Concept.

Ed was born to a lower middle class family in Baltimore, Maryland in 1944. He was one of the few children born during World War II just because his father had been declared "4f" and was not physically acceptable to the military. Always interested in aviation, he was educated as an engineer and worked at Pratt & Whitney Aircraft Corporation upon graduation from the Johns Hopkins University in 1966; but the war in Vietnam was on-going, and he felt a strong desire to be in it with the Navy as a bombardier/navigator in the their newest all-weather attack aircraft, the Grumman A-6 Intruder. Through an extraordinary set of circumstances, this all came to pass; and he eventually found himself in the first aircraft to bomb Haiphong, North Vietnam, after the 1967-declared bombing halt. He and his pilot received a warm welcome.