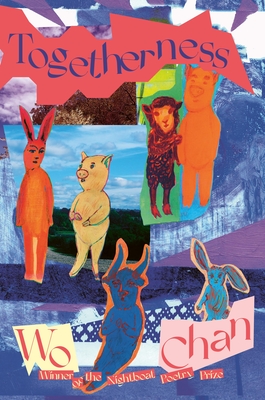 A debut poetry collection in which non-binary poet and drag performer Wo Chan recounts stories from their queer childhood and adolescence.

Togetherness sends out sparks from its electric surface, radiating energy and verve from within its deep and steady emotional core: stories of the poet's immigrant childhood spent in their family's Chinese restaurant, culminating in a deportation battle against the State. These narrative threads weave together monologue, soaring lyric descants, and document, taking the positions of apostrophe, biography, and soulful plaint to stage a vibrant and daring performance in which drag is formalism and formalism is drag--at once campy and sincere, queer, tender, and winking.

Wo Chan who performs as The Illustrious Pearl is a poet and drag artist. They are a winner of the 2020 Nightboat Poetry Prize and the author of TOGETHERNESS (2022). Wo has received fellowships from MacDowell, New York Foundation of the Arts, Kundiman, The Asian American Writers Workshop, Poets House, and Lambda Literary. Their poems appear in POETRY, WUSSY, Mass Review, No Tokens, and The Margins. As a member of the Brooklyn-based drag/burlesque collective Switch N' Play, Wo has performed at The Whitney Museum of American Art, MoMA PS1, National Sawdust, New York Live Arts and elsewhere. They are a regular at Sasha Velour's Nightgowns and have starred in short films and music videos, featured in documentaries, and performed at cabarets and clubs across the US. They are currently the Communications Manager of Lambda Literary and the Editor of the Lambda Literary Review. They live in Brooklyn, NY. Find them at @theillustriouspearl.